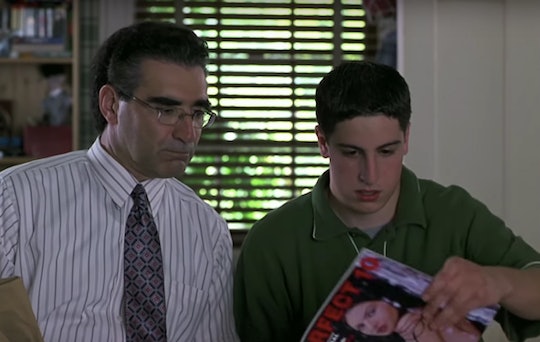 Some actors, if they're lucky enough, have a cult classic on their resumé. Not only does starring in a mega-popular and beloved movie have a lot of financial benefits (residuals and sequels, people) but it also gives an actor the chance to connect with fans in a really meaningful way, even long after the work first premiered. Case in point: Fans are going *wild* over this photo of Jason Biggs and his kids with his American Pie dad, aka actor Eugene Levy. If you are a big fan of the 1999 hit, you'll definitely love this sweet (and funny) snap.

On Monday, Biggs's wife, actress and writer Jenny Mollen, took to Instagram to gift American Pie fans with an amazing photo of her kids and Biggs hanging out with Levy.

Levy, who played the character of Noah Levenstein (Jim's dad), in all four of the movies, has kept in touch with Biggs throughout the years, and their friendship is really touching. And it's especially adorable that Levy cares about maintaining a relationship with Biggs and Mollen's two boys, 3-month-old Lazlo and 3-year-old Sid.

But the best part about the pic, however, is that it features Sid "coincidentally" chomping down on an apple, which is a direct nod to the infamous apple pie scene in the flick.

Jason’s father stopped by to meet the baby. ( the apple is purely coincidental).

Shortly after Mollen shared the snap, a ton of fans took to the post's comment section to share their enthusiasm. "Omg this is the best thing I’ve ever seen," a fan exclaimed. Another person chimed in, "Haha love the #apple reference!" And one particularly thrilled person wrote, "This is my favorite photo you’ve ever posted."

Although Biggs and Levy have yet to comment on the pic themselves, it's a safe bet they're thrilled its getting so much love from the internet.

In fact, Biggs has always been happy to share with fans how American Pie continues to play a hysterical role in his personal life despite the age of the film. Back in September 2015, Biggs revealed that Sid "ironically" picked out a book titled, Apple Pie that Papa Baked, during what was supposed to be an innocent trip to the library.

Biggs captioned the silly moment, according to PEOPLE:

Sid picked out a book at the library today. I don't think he appreciated the irony.

"Oh too funny! If he only knew," one fan wrote at the time. Someone else added, "The apple pie does not fall from the tree."

Of course, it's also worth pointing out that Biggs's jokes about American Pie and his family haven't always been a hit.

In November 2017, Biggs caught some heat for comments he made about having boys versus girls, and why it would supposedly be easier for him to describe the apple pie sex scene (that's the best description I've got) to a son compared to a daughter.

Biggs explained, according to PEOPLE:

I’ve only thought of it in regards to I’m glad that I have boys versus girls. I don’t know how it’s going to go down, but I know that no matter how it goes down, it’s going to be easier having sons than it would have been having girls.

Many people thought Biggs quote was a tad problematic because it implies that there's something uncomfortable about dads giving their daughters the "sex talk" or that girls would have a more difficult time understanding the concept of sex, which are both incorrect notions. Either way, Biggs might want to revisit this parenting issue at some point down the road.

But as for Biggs and Mollen's most recent pic, it's an obvious win. It's funny, sweet, and it hits all the right notes with American Pie's loyal fans.