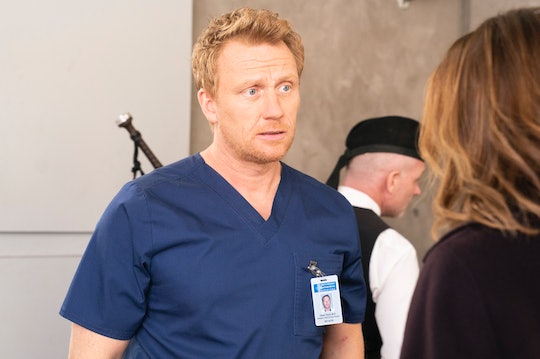 Fans Are So Over Teddy & Owen On 'Grey's Anatomy'

Owen has never been lucky in love on Grey's Anatomy. He has had one failed marriage after another and relationships that just didn't pan out for him. This season, he got back together with Amelia twice until she finally ended things, seemingly for good. Now might be the best time for him to finally be with Teddy, but fans don't want Teddy and Owen back together on Grey's Anatomy. At this point, can anyone really blame fans for feeling protective of Teddy? Owen seems to come running to her when things aren't working out for him with anyone else. Even if he has real romantic feelings for her, that probably isn't the best way to try and win her over.

Unfortunately for Teddy and Owen, they never got the timing right, and a few episodes ago, Teddy seemed ready to let go of the part of her that hoped they could be more than friends. With Amelia out of the picture now, however, Owen is bound to go running back to Teddy. But Teddy is already making time for Koracick and Owen would be the worst if he tried to get in the middle of them again.

Some fans already see Owen as the worst possible match for Teddy, despite their friendship and their history. Owen might have once had the potential to be another McDreamy on Grey's Anatomy, but in some fans' eyes, he has gotten progressively worse over the past few seasons.

When the somewhat unorthodox love triangle between Teddy, Owen, and Amelia came about earlier this season, Owen seemed intent on making things work with Amelia. At the time, they were taking care of Leo and Betty together and they were like a little family unit. Then, Teddy came with her announcement of the pregnancy and Owen was still determined to make things work with Amelia, despite his complicated history with Teddy.

The love triangle, if you can call it that, played out in a fairly mature way and Kevin McKidd, who plays Owen, told Entertainment Weekly that this was because of Owen's past with both women.

"There is so much history between Owen and Amelia, and Owen and Teddy," McKidd said before the mid-season finale. "And Teddy doesn’t seem to be going anywhere. She is having his baby. Owen and Amelia are sharing their children together. They are all very much embroiled and invested in these things. It’s going to get very complicated before it gets simpler and ironed out."

Amelia finally dipped out of the very complicated and messy love square it had become with Koracick involved and some fans think she may be much better off without the hassle. She definitely showed courage in being able to let Owen go despite any residual feelings she had for him.

Now, Owen is probably going to try and win back Teddy to once again create his version of a happy complete home. But some Grey's Anatomy fans aren't having it. They want better for Teddy and don't want her to be another casualty in Owen's ongoing hunt for the perfect relationship.

Some fans are even calling for Owen to be taken off the show completely. They have had it with the way he treated Amelia the past couple of seasons and how he essentially strung her along toward the end of their relationship this time around. So naturally, Grey's fans don't want that for Teddy either.

Regardless of how fans feel about Owen and Teddy getting back together, they are still having a baby. Maybe Owen doesn't need to leave the show completely, but he and Teddy need to make up their minds about being together because honestly, this whole will they/won't they thing is starting to get a little stale.