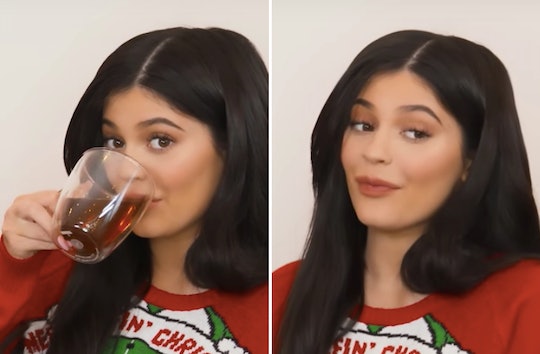 When it comes to their bodies, the KarJenner sisters cannot win with fans. Now that both Khloé Kardashian and Kylie Jenner are rumored to be pregnant, devotees and haters are trolling every pic and picking apart their bodies, which is pretty awful. This week, fans say that Kylie Jenner's face in this video does nothing but "prove" that she's pregnant, and things are getting pretty nasty in the YouTube comments.

Despite not confirming or denying the rumors (which the family will likely do sometime during the Keeping Up With The Kardashian mid-season finale in a few weeks, according to some savvy fan theories), Kylie continues to post on Instagram and make videos for Kylie Cosmetics. This week, she released a hilarious video of her and two friends, Jordyn Woods and Victoria Villarroel, playing a game of "Never Have I Ever" while drinking tea in a ugly Christmas sweaters. Because you know, that's what the holiday season is for.

Instead of just enjoying watching Kylie and her friends LOL at the questions and their answers (watching people laugh is always hilarious), people were obsessed with picking apart Kylie's face, of all things. It's really offensive no matter how you look at it — if she is pregnant, it's calling out what would be a super normal weight gain. If she's not, it's fat-shaming. Of course the KarJenner's are used to that kind of bullying, but it's unnecessary nonetheless.

The Comments Mainly All Focused On Her Face

I don't know about you, but the last thing I want to hear is that my face is "puffy." Or just assume that everyone's experience with pregnancy is the same.

And Not In A Nice Way

In fact, there was a plotline in Season 5 of KUWTK where Kylie has boy friends over at the house and her dad gets so crazy about it that she calls a car service and goes to crash at Khloé's house. So now we've somehow slut-shamed her for having boy friends and allegedly being pregnant? Oh, YouTube commenters.

Everyone Was Obsessed With Kylie's Face

Even though it really doesn't look different than usual.

People obsess over the Kardashian and Jenner sisters' looks all the time. For example, when they aren't looking for a "baby bump" or a weight gain, they're judging the women for any alleged plastic surgery they might have gotten.

But, why does it matter to anyone if they did get plastic surgery? And if the Kardashian and Jenner women have body image or self-esteem issues, don't you think it might have something to do with all of the public scrutiny they get every waking minute? There are entire articles dedicated whether the women look "better" or "worse" all the time. It could really drive someone to have a little body dysmorphia, as Kim Kardashian recently opened up about.

Some Comments Went Way Too Far

Who knows how the comments actually affect them, but as fans of KUTWK know, the women do check their mentions and often react to the public's perception of them. Yes, they're reality TV stars and have put themselves in the public eye, but that doesn't mean the culture of hate surrounding their every move and body part is fair. It's really not.

For that reason alone, it's no wonder that both Khloé and Kylie have ignored the reports that they're pregnant and seem to be enjoying trolling people with the news. If they are pregnant, revealing the news could ruin such a special time as paparazzi chase them around trying to get shots of their pregnancy bumps or shame them for going out to dinner or to a club. And if they aren't pregnant, they'd still be shamed, as evidenced by every comment section everywhere.

The KarJenners will all let us know when they're ready. In the meantime, try not to comment if you don't have anything nice to say. No one likes to be judged for their body — pregnant or not.