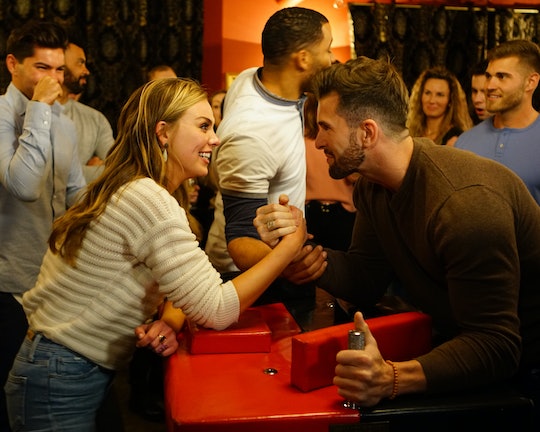 It's not unusual for Bachelorette contestants to have celebrity doppelgangers, but usually they aren't the spitting image of cartoon characters. Unfortunately for Jed, fans see a particular animated boy genius when they look at him and now that fans think Jed looks like Jimmy Neutron on The Bachelorette, you won't be able to unsee it.

I wish I could that that it wasn't true and that everything about Jed's face, head, and hair don't eerily resemble Jimmy Neutron from The Adventures of Jimmy Neutron: Boy Genius that so many of us are guilty of watching back in the early 2000s. But you can't not see the resemblance once it's pointed out. And whether Bachelorette fans mean it as an insult or just an observation, Jed officially has his celebrity doppelganger and I refuse to believe there is anyone he resembles more.

To be honest, some Bachelorette fans' assessment of Jed's resemblance to Jimmy Neutron might stem from their distaste for Jed. Ever since the news broke of Jed having a girlfriend at home when he left to go on The Bachelorette and allegedly using the show as a stepping stone for his music career, some fans have been decidedly anti-Jed. This new revelation of his animated lookalike could be a dig at the contestant. That doesn't make it any less true, though.

Haley Stevens, who dated Jed before he went on The Bachelorette, recently told The Bobby Bones Show that she and Jed had been agreement about him going on the show to potentially further his music career. But upon returning home, he allegedly ghosted her and the pair eventually broke up with little explanation from Jed. Naturally, Bachelorette fans have brought out their pitchforks against Jed and they are more than willing to compare his likeness to Jimmy Neutron with little mercy.

Whether you love Jed or decided that you can't stand him the moment he busted out his guitar this season, you can't really deny that Jimmy Neutron is basically his long lost animated twin. From the general shape of Jed's head to the height of his hair, fans aren't letting this one go.

It could be worse. Jed could look like a cartoon character that isn't even human, so at least he resembles a highly intelligent human cartoon character. Maybe there's not really an upside, but now that I have seen it, I will never be able to *not* see Jed as Jimmy Neutron. They are officially one in the same. One fan on Twitter joked that Jed has a side gig as a Jimmy Neutron impersonator. I'm not sure there's a market for that, but if his music career doesn't quite take off, Jed definitely has a solid backup career option.

Honestly, I don't think the comparison is even an insult at this point. It's just an undeniable fact that you can't ignore anymore. The more you look at Jed and his cartoon twin side by side, the more you see the resemblance. Unfortunately for fans who aren't rooting for Jed or for those who didn't place him high up on their fantasy roster, it doesn't look like Hannah has noticed the uncanny resemblance.

Because of that, Jed will likely continue to go far this season. He is already guaranteed to be one of Hannah's four hometown dates. Maybe some fans on Twitter are right and Hannah had a childhood crush on Jimmy Neutron. Although to be more realistic, she probably just hasn't made the connection, which is totally understandable. Jimmy Neutron doppelganger or not, the only important thing is that at the end of it all, Hannah is happy.