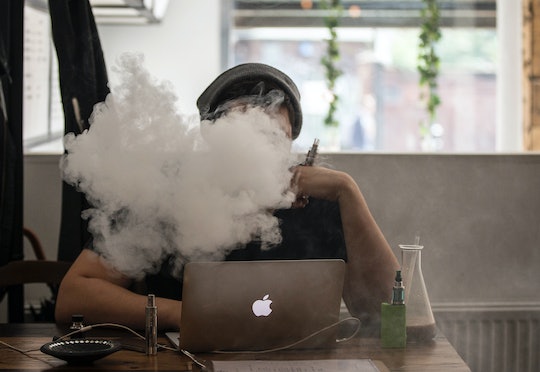 Vaping has become an incredibly popular habit in the past few years, particularly among teens. After decades of being told that smoking cigarettes is dangerous to your health, people turned to vaping (or smoking e-cigarettes) as an alternative. Perhaps because they viewed vaping as healthier or cleaner, or perhaps because it simply became a trend. But now that the first possible vaping death has been reported by health officials, parents of teens are beginning to get genuinely worried. Because how much do we really know about the side effects of vaping?

On Friday the Illinois Department of Public Health shared a report from the state's chief medical officer, Dr. Jennifer Layden, that an adult patient had died from a severe lung disease after vaping, as per The Guardian. Health officials considered this to be the first death in the United States to be related to the practice of using e-cigarettes. Prior to this death, the Centers for Disease Control and Prevention has reported that 193 people have contracted severe respiratory illnesses after vaping in 22 states. It's important to note that these are considered potential cases as Ileana Arias, a CDC official, said, as per The Guardian: “Investigators haven’t identified any specific product or compound that is linked to all of the cases.”

Dr. Ngozi Ezike, director of the Illinois Department of Public Health, told CNN that the state was seeking help from the CDC as more patients were experiencing symptoms potentially related to vaping:

The severity of illness people are experiencing is alarming and we must get the word out that using e-cigarettes and vaping can be dangerous.

These symptoms include nausea, diarrhea, cough, shortness of breath, and fatigue that "worsened over a period of days or weeks before admission to the hospital."

While this death in Illinois is potentially the first to be directly linked to vaping, it's certainly not the first time the popular alternative to smoking cigarettes has been in the news for health issues. In July Tryston Zohfeld, a 17-year-old Fort Worth, Texas teen, who had never had any issues prior to vaping, was admitted to the hospital after his lungs began to fail on him. As Zohfeld told WFAA:

I woke up just throwing up everywhere, and my heart was beating out of my chest going 100 miles an hour.

After being admitted into the intensive care unit at Cook Children's Hospital, Zohfeld was put into a medically induced coma and was kept alive with an oscillatory ventilator for 10 days. It seems his lungs had been completely blocked after vaping regularly since he was in the eighth grade, something his parents hadn't previously known. While Zohfeld has mostly recovered, his lungs experienced scarring he will carry throughout his life.

One of the worst issues with vaping right now is that there are still many unknown factors surrounding the practice, as per John Hopkins Medical Center. They are full of chemicals that might be different from cigarettes but that doesn't mean they aren't dangerous. Particularly for teens, as the CDC notes, since most e-cigarettes still contain nicotine that can harm brain development.

Parents have every right to be concerned about vaping. Here's hoping this is a trend that passes in the very near future.