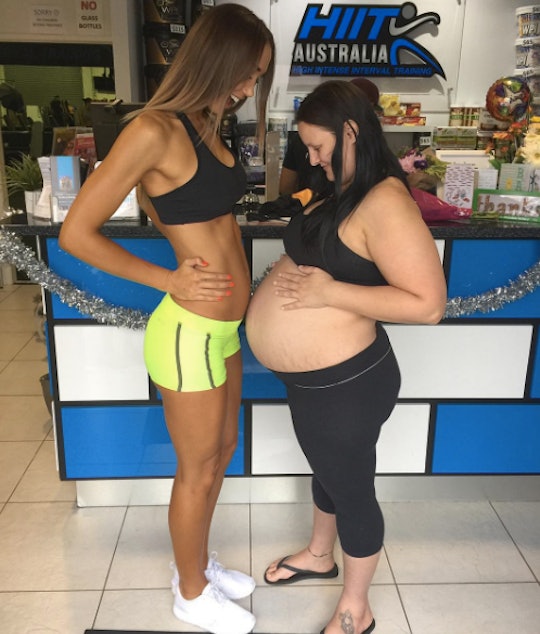 Australian fitness model Chontel Duncan made headlines when people started freaking out about photos on her Instagram account showing her teeny, tiny pregnancy belly (and killer abs). Duncan assured the haters that she and her baby were healthy and that her doctors had no concerns, but when that didn't do much to ward off the criticism, she took a photo with her pregnant bestie, Natalie Smith, who was only four weeks further along than she was, to prove that all pregnant women look different for so many reasons that have nothing to do with their health. The pic went viral (because it was freaking awesome, and so necessary), and now that both women have had their babies Chontel Duncan recreated her viral pregnancy photo with Smith, according to TODAY, and it's even better than the original (spoiler alert: this one features two adorable newborns).

While the original viral photo showed Duncan and Smith standing belly-to-belly to show how even women close in gestation could have totally different bellies, the new photo showed the mamas holding their sweet baby boys.

Even though Duncan and Smith weren't very far off from each other in terms of their due dates, they looked much different from each other while they were pregnant, even though both of them were happy and healthy and eventually gave birth to happy, healthy baby boys. As Duncan explained in the photo's caption, there were so many reasons why they looked so different: Duncan is much taller with a longer torso, while Smith was pregnant with her third child compared to Duncan's first (and any mom who has been pregnant more than once knows it takes less time to show). She wrote,

Each women carries different and this most certainly doesn't mean one is doing something wrong or not healthy etc. We both have healthy growing babies & we both have had incredible pregnancies so far, feeling amazing & full of energy.

Duncan told Today that the inspiration behind the updated photo was pretty simple:

We decided to imitate the same photo because that photo was such a big shock. We wanted to show where we were now. Plus our little boys are way too adorable not to show them off.

But cute babies aside, Duncan's photo really does make an important point. Even though women's bodies are often criticized in general, when a woman becomes pregnant, the pressure becomes even greater, especially if she's in the spotlight. For Duncan, that meant enduring comments that she was harming her baby by not gaining enough weight (something other celeb moms like Coco Austin and even the Duchess of Cambridge had to contend with). Other women, like Chrissy Teigen, received backlash for (gasp!) eating cereal while pregnant, or for going out to dinner a week after her daughter, Luna, was born (the horror!). But, as Duncan's photo shows, there is no single right way to be pregnant or to be a mom. So maybe it's time people cut pregnant women some slack and keep their unhelpful opinions to themselves? (All four women delivered healthy, happy, loved babies after all).

The good news is, the criticism hasn't affected Duncan's new-mom joy — in fact, she's already looking ahead to her next pregnancy! She told People she doesn't plan on waiting long to add another member to her family, and said "if all goes well, I plan to fall pregnant again this year."