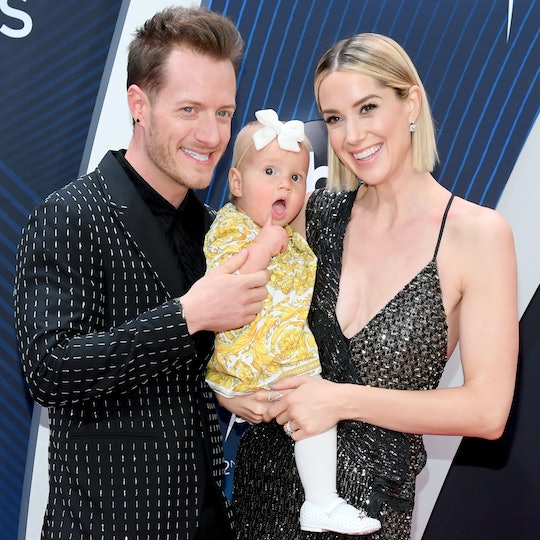 The early newborn days can be a bit of a blur — especially those during recovery, but birth and postpartum photography goes a long way towards preserving those memories. This photo of Florida-Georgia Line's Tyler Hubbard helping his newborn latch is an incredible reminder of the role dads can play from the get-go. The country star and dad-of-two has been a hands-on parent from the start, and has gained some valuable skills along the way.

Hubbard and his wife Hayley welcomed their second child, Luca Reed, just two short weeks ago, according to Entertainment Tonight. Luca made his arrival exactly on his due date, coming into the world at 3:40 a.m. on Aug. 19, weighing 8 lbs., 11 oz., and measured 20.5 inches long at birth.

In a sweet birth announcement post to Instagram, Hubbard praised his wife and expressed his joy. "Words can’t describe the overwhelming emotions that I experienced last night as we witnessed the miracle of life," he wrote, as reported by Taste of Country. "I couldn’t be more proud of my amazing wife @hayley_hubbard through this whole journey. She’s an absolute angel and meant to be a mother. I thank God for answering our prayers and bringing Luca into the world peacefully and smoothly. I didn’t think life could get any better but it just did."

On Sunday, the proud mama shared a photo of Hubbard helping her to nurse Luca and guiding his head to a proper latching position, People reported. “My Lactation consultant @tylerhubbard — but actually 😂,” she captioned the touching photo. “Love that @katiekauss captured this because he really was reminding me how to make sure Luca was latched properly."

In another post, Hubbard shared a slideshow of photos from the birth that showcased some of his other fatherly skills — "DUDAla services," as he called it. "Offering my ‘DUDEla’ services for those in need of a good shoulder to lay on during contractions, back rubs, and a good flashlight for when the head starts showing,” he wrote, sharing a gallery of snaps from his son’s recent birth.

The photos showed Hubbard supporting Hayley while she labored in various positions, all the way up to Luca's birth and dad cutting the umbilical cord during some skin-to-skin, according to People. All of the support that Hubbard offered Hayley during her birth shows the active role that dads can play in labor and delivery. Similarly, his assistance with Luca's latch shows that dads can be a big help with breastfeeding as well.

“Studies show that when a nursing mother has a ‘significant other’ who is educated about and supports her choice to breastfeed she is much more likely to be successful at it," said Becky Flora, BSed, IBCLC, writing for Mother and Child Health. Along with aiding the latching process as Hubbard did, dads can also provide water and food for mom while she's nursing, burp and change the baby if needed after feeding, and help with household chores while mom is otherwise occupied; among other things, according to HuffPost.

Having and raising a baby is hard work, but it's made a lot easier with a helpful and supportive partner. The sweet photo of Hubbard helping with Luca's latch is a reminder to dads everywhere to get educated and get involved. And what a beautiful reminder it is!