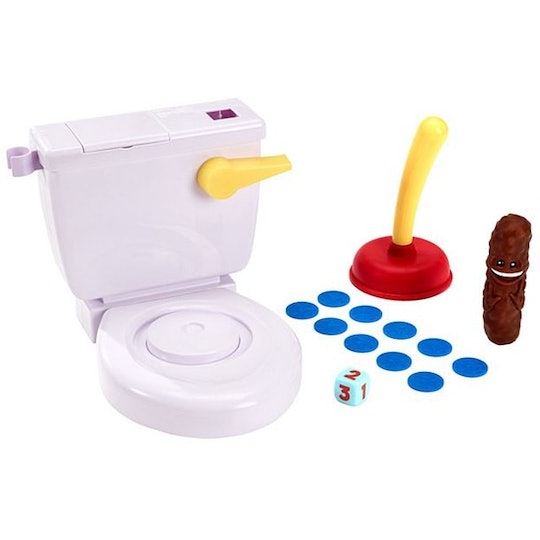 Have you ever played a board game where you're so bored that you start cheating just to finish it faster? I've thrown so many games of Chutes and Ladders and Memory that at this point, my kids probably question my ability to roll dice and count. Thankfully, the gods have heard my plea for a game that is not only fun, but short, sweet, and to the point. Flushin' Frenzy by Mattel will make you laugh until you poop your pants, or until it comes flying out of the toilet. (The toy toilet, not the real toilet!) This scatalogical party game is definitely going to be on many kids' Christmas lists this year, so you might want to snatch one up now.

Kids love poop jokes. To them, nothing is funnier than farting, pooping, plunging the toilet, or laughing at dogs doing their business in the park. If I had a dollar for every time my daughter answered a question with "poop?" I'd be able to buy out the toy section of Target. Bodily functions fascinate the little ones, and this game capitalizes on that fact. As per Mattel, here's how the game works: "Flush the handle on the toilet to roll the die, and when a number comes up — you have to plunge the toilet that number of times. But be careful, after any given push of the plunger the poop may come flying out of the toilet." (Which is way funnier when it's not real life. Which is a thing that happens when your kids use too much toilet paper.) The first player to pick up the poop wins a token.

Do you see that? It's a tear in my eye. You know why? The game only comes with 10 tokens. I once played a game with my daughter where whoever garnered the most tokens won, and that game had 50 tokens. 50. Do you know how long I was playing that game? Forever. I think we're still playing. It was so stressful, I couldn't take it. It was like playing Wizard's Chess, but the damn knight didn't have the common decency to end it all for me.

Kids are going to be extremely motivated to see that faux poo fly out at them. It's going to be pure mayhem, in fact, and it will happen in the blink of an eye. I don't know how well my kids will actually catch it — as they're not really gifted with the hand-eye coordination required — but they can sure as heck find where it lands, blame it on the dog, make some fart noises, and pick it up for the point. Will there be tears? Absolutely. Someone is definitely going into time-out after playing this. But that's okay, because time-out is mommy's quiet time. We have a very strict "no talking unless you're going to puke or die" when you're in time-out, and "no talking to those in time-out" rule. The kids are either super happy about playing or they're silent. I'm calling it a win.

Just for one moment, let's talk about the smiling feces. Now, I'm sure that Flushin' Frenzy by Mattel will make you laugh until you poop your pants, but it would also be hilarious to stick the poop between the sheets on your partner's side of the bed. They go to lie down, pull back the duvet, (because no one uses a top sheet anymore, Linda) and *expletive deleted.* After they swear a blue streak, they'll notice the offending object has a happy face, thus rendering it immediately inoffensive. That in and of itself is a reason to buy this game, isn't it?