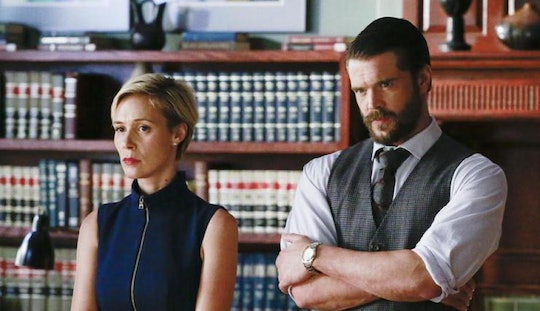 Some might say it was a long time coming because Frank and Bonnie have worked together for a long time on throughout the series, but now that it has actually happened, it was pretty darn awkward, especially for us viewers. When Frank and Bonnie hooked up on How To Get Away With Murder, it was not only downright shocking, but also highly uncomfortable and completely out of left field, especially considering the fact that we've seen zero sexual chemistry between the two of them up to this point. Not to mention, this is totally rude to poor Laurel. Understandably, Twitter is distraught over this random, middle of the night hookup sesh between Frank and Bonnie.

I mean, I totally get it that the two of them are vulnerable and broken and have been since Annalise saved them from their dark and complicated pasts, but it doesn't even fit into the show properly right now. Having Bonnie and Frank together on HTGAWM doesn't really help anything or add a great deal to the storyline, so maybe it served as a way to make Laurel move on eventually or to make Bonnie turn on him since he did leave her the morning after they slept together on the hotel room floor.

Honestly, it's not cute, it's definitely not sexy, and there was never any hope of the two of them being together, so why now? What purpose did Frank and Bonnie hooking up on HTGAWM serve for fans or for the show in general? It was uncomfortable and just way too Flowers in The Attic to handle.

In this case, it's probably more than OK to be taken aback and just a little weary because of all of the messiness that comes with a Frank and Bonnie hookup. We now not only have the drama with Laurel that will eventually come, but if her baby is Frank's, that's a whole other ball game. Also, Frank ducked out on Bonnie the morning after their surprise tryst, so there's that. Basically, as most of us could have predicted, no good can come from Bonnie and Frank sleeping together on HTGAWM.

Maybe it was just a fleeting moment of vulnerability between two very lost people who have done unspeakable things and been through so much in their lives. Maybe what happened will never be brought up again. (OK, that's likely wishful thinking.) But it's very hard to ship Bonnie and Frank as a couple right now with everything else going on. So let's just not, OK?