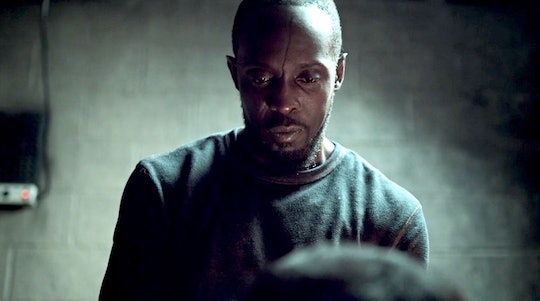 When Naz arrived at Rikers Island on The Night Of, fans were right to assume that he was done. He knew nothing about fighting or even protecting himself and as a small fish in a big and intimidating pond, being picked on and beat up was inevitable. Cue Freddy Knight, former boxer and criminal who basically runs the joint. He took an immediate interest in Naz, which led fans to come up with the Freddy theories from The Night Of that back up the obvious claim that he's after more than just intelligent and stimulating conversation from the college kid.

So what is Freddy after from Naz? More importantly, what can Naz even offer? Yeah, he can bring intelligent thoughts and conversation to their relationship, as he's already proven, but that's not really going to cut it in prison. It's nice to think that somehow Naz's intelligence and schooling will help him survive while locked up, but let's be real. That just isn't going to happen.

This may be a show based entirely on fiction, but using your book smarts to survive in prison is hard to believe in any capacity. Freddy theories from The Night Of are all about Freddy's real possible motives with Naz and what he is going to want in return for giving him protection and a private room, away from the trenches and homemade acid.

It would be nice to think that Freddy is just trying to help someone he sees as innocent, but something tells us that he's in it for something much bigger for himself. You don't become the leader of a prison by not being super intelligent yourself, even if most of that comes from street smarts.

He's Going To Turn Naz Into A Killer

By taking Naz under his wing, so to speak, Freddy is slowly turning him into a more hardened person. And while prison will likely do that to you in general, being one of the men on Freddy's crew isn't going to have a happy ending for you. Right now, all Freddy has asked Naz to do is swallow some balloons of coke, which was insane in itself, but that only means that his next favors will get harder and have bigger consequences. Naz almost beat to death the inmate who burned him with acid. Freddy knows he's capable of hurting someone now, and he could very well use that to his advantage down the road.

He's Going To End Up Killing Naz Himself

Little by little, we see Naz gaining more of a backbone and more of the ability to use his strength to his advantage, and until now, we haven't been able to see those sorts of sides of him. But who's to say Naz doesn't get too big for his britches? He's developing a newfound confidence, and if Freddy starts to feel like he can no longer control Naz, that won't end well.

He Wants To Control Naz

Sure, Freddy was initially attracted to Naz because of his intelligence and college education, but he also probably saw the vulnerability in Naz and the fact that controlling him would be easy. And in gaining control of Naz early, he could possibly ensure that he would have the man's trust from the beginning. With other, more experienced criminals, there would be a constant worry of having them back stab him, but with Naz, he probably figured he would get a baby bird early on that he could mold himself.

This Freddy theory from The Night Of is kind of crazy, but totally plausible, given the nature of the show at this point. One Redditor pointed out the fact that Freddy is from Queens and so is Andrea's stepfather. Now, that doesn't really matter too much since it's a big place where neither could have ever crossed paths, but an inmate told Naz that Freddy could "wiggle a finger up in that tier, and five people are dead in the Bronx." What if Andrea's stepfather was pissed that after her mother died, the house was left to Andrea, while he was left to live in an apartment in Queens? So he wants to hire someone to kill Andrea, leaving him the house and everything in it.

This leads us to Duane Reade, a hired hit man who works for Freddy on the outside and was utilized by her stepfather to get the job done. This would explain both the way the house didn't seem to be broken into and the fact that when Andrea and Naz were going into the house that night, he was staring at them both intently. In this case, trying to make sure he had the right mark, a.k.a. Andrea.

He's Using Naz To Save Himself

If Freddy gets close enough to Naz to gain some real information about his case, imagine what that could do for Freddy himself. As far as we all know at this point, the killer could have been any number of random suspects, including Naz himself, but what Freddy possibly wants is the first confirmation of this murder. If he can get Naz to confess to him what he did to Andrea, then maybe Freddy can use the information to leverage himself some time off his own sentence.

The theories about Freddy from The Night Of could all be alluding to something of the truth, or none of them could be accurate and it will turn out that we don't know Fred E. Knight as well as we think we do so far. But we only have three episodes left to figure out what Freddy's real motives are and what Naz's fate will be. So hopefully we'll have less pooping in a bucket and more plot development.