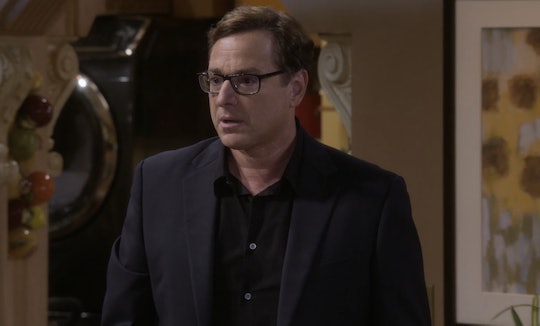 'Fuller House' Makes Fun Of Bringing Back Old Shows, Proving It Has A Good Sense Of Humor

When you think of Full House, the first thing that comes to mind isn't usually a clever wit. Sure, it was cute. But funny? Not so much. Hear me out before you judge what I'm about to say — the Netflix reboot is pretty hysterical. If you need proof, the Fuller House joke about bringing back old shows proves it has a sense of humor. And not "you got it, dude" funny, but laugh out loud funny. There are lots of nods for fans of the original series, but the one that shows they are totally not taking themselves too seriously comes in episode eight when Bob Saget comes back. Danny's in town for a Wake Up, San Francisco reunion show and Kimmy Gibbler asks him if he doesn't think it's sad when shows wrangle up old casts for reunion shows. Saget quickly counters, "not when the show was watched by millions." And just to toot their own horns he adds "or when the stars are cultural icons." Get it?

The new series is full of little inside jokes like this. And it sort of makes you think if you watched the original as a kid — were there jokes just for grown ups back then, too? Not like these ones. Sure, Uncle Jesse was always just about to talk about sex before Danny stopped him back in the day. But these new ones are a little more updated. Have mercy.

It's not just pop culture references like Donald Trump being a "bad word" or mentions of Stephanie having a stash of pot brownies. Kids will still miss those things. The best moments are when they get super referential. There's a scene with Danny playing cards with his grandkids. He puts down a "full house" and Jackson immediately drops a "fuller house." Cheers from the studio audience and a smile from Candace Cameron Bure finish off the moment. They take constant digs at the Olsen twins for not signing on.

If your first reaction to hearing about the Netflix reboot was to groan (raises hand), the writers and cast totally get you. It's like everyone knew it was a silly thing to do, but they did it anyway. Maybe they were all eating Stephanie's pot brownies. Maybe they all just decided that if they had to do this thing, they might as well have fun. It's not raunchy or dirty by any 2016 standard, but it is way smarter than the TGIF version. Or maybe we're all just grown up now.