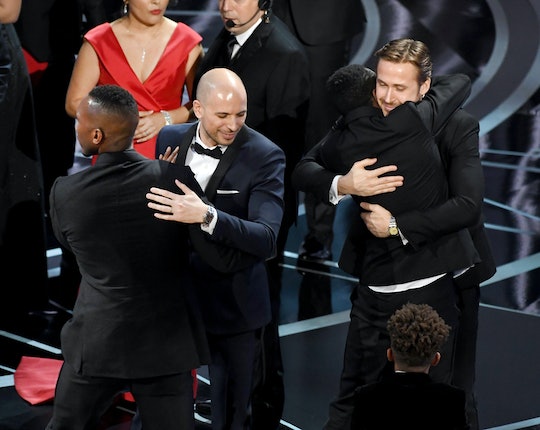 Sunday night's Oscars ceremony could not have ended in a more dramatic way. Thanks so an onstage mixup that's already going down as the most significant flub in the awards show's 89-year history, the musical La La Land was awarded best picture, though it turned out the award was a mistake, and the critically acclaimed drama Moonlight had actually won the prestigious honor. The debacle gave way to harried investigations into what went wrong, representatives from both films acting with grace and humility amid the chaos, inevitable comparisons to the 2016 presidential election (because that's where we are as a country right now), and, of course, funny tweets about #EnvelopeGate — the amazing name given to the historic flub that stole the thunder from the well deserving cast and crew of Moonlight.

#EnvelopeGate is an apt hashtag shorthand for the epic snafu. The La La Land cast and crew had already crowded onto the stage at Dolby Theater in Hollywood and begun making their acceptance speeches when the news began to ripple through their euphoria that presenters Warren Beatty and Faye Dunaway had mistakenly been handed the wrong envelope — the one that identified La La Land's Emma Stone the recipient of the Best Actress Oscar. Soon, La La Land producer Jordan Horowitz took to the mic with a revelation that left audience members with mouths agape: "Guys, guys, I’m sorry, there’s a mistake," he said, according to The Boston Globe. "Moonlight, you guys won best picture. This is not a joke."

Some members of the Moonlight team looked dazed as they made their way to the stage, before the reality that they had earned the night's biggest award after all set in. And for many viewers at home, the whole thing was shocking, juicy fodder for the internet jokes that really confirm the wow factor of moments like #EnvelopeGate.

First, there were the obvious jokes about how the heck a mistake like this could have happened, especially because the process of tallying up the votes and announcing the winners is one that is closely guarded and meticulously executed, as NBC News reported:

There were calls for an immediate and full investigation, particularly those of the tongue and cheek variety:

Right after Horowitz announced the mistake onstage, Oscars host Jimmy Kimmel was quick to compare it to a similar case of a mistaken winner. "Personally, I blame Steve Harvey for this," he said, referencing the 2015 incident when Harvey, who was hosting the 2015 Miss America pageant, announced that the wrong contestant had won. The internet wasn't to far behind him in imagining Harvey's reaction to #EnvelopeGate:

Harvey himself even got in on the joke, which was hilarious:

But, really, it's important to consider how this felt for those who worked so hard on La La Land, too. The movie did win six Oscars in other categories, though, which surely softened the effects of the Seinfeld-esque blow that @StardomLA imagined:

But the Twitter reactions couldn't confine themselves to the realm of pop culture, which is marked by much more levity than the dark world of politics. Alas, Twitter delivered with quips about the fact that former Democratic presidential candidate Hillary Clinton won the popular vote despite losing the election, framed in the context of the card Horowitz held up to prove he was not joking when he revealed Moonlight had actually won best picture:

Some tweeters also facetiously pointed out that the Academy was simply trolling the situation with "alternative facts" by naming La La Land the winner, a phrase Kellyanne Conway, top aid to President Donald Trump, coined when used it to describe blatant untruths the administration was spreading:

But not all the tweets were funny, nor should they have been. Some Twitter users wanted to make sure that Moonlight, which has an all-black cast and won the biggest award at an event that has been viewed as lacking in diversity, got credit where credit is due:

All in all, the awkward, embarrassing mistake will ensure that the Oscars dominates the news cycle, as well as remind anyone who's paying attention to go see both Moonlight and La La Land.