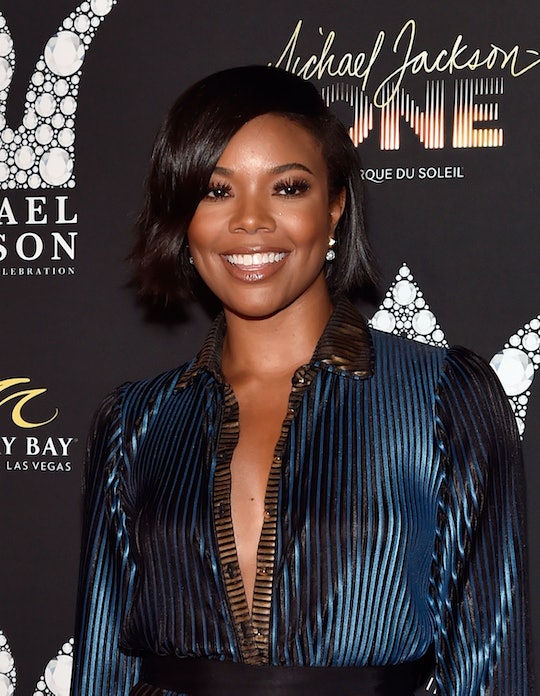 Everyone knows that the Internet can be an absolutely merciless, relentless place for mothers. Whether it comes from family, friends, or — in the case of most celebrities, complete and total strangers making moral and ethical assessments about their lives — the judgment is pretty out of control. Gabrielle Union says she's been battling mommy shamers since the day her daughter was born, and TBH, it's depressingly believable.

At the end of last year, Union welcomed her first daughter, Kaavia James, with her husband, Dwayne Wade, via surrogate, People reported. “We are sleepless and delirious but so excited to share that our miracle baby arrived last night via surrogate and 11/7 will forever be etched in our hearts as the most loveliest of all the lovely days,” Union wrote on Instagram at the time.

However, she most recently shared that literally since the day her daughter was born, Union has had to clap back at people online who are trying to police how she does every little thing in parenting. “I had to hit the mommy shamers day one,” she told People in this week's issue. “I’m going to do it my way. I’m sure I’m going to make all kinds of mistakes and when I ask for help, which I will, I would love to hear all y’all’s advice. Everybody has been on my journey of pain and anguish and trauma, and I owe it to myself to enjoy every second of my joy.”

For those who haven't been following the actresses' journey, those "shaming" moments have reportedly involved everything from how she kisses her daughter, to how she herself dresses now that she's a mom.

In December of last year, Union posted a video of herself giving her infant daughter a kiss on the lips, to which people were, well, outraged. She later shared, according to Hello Giggles:

Hey guys, I appreciate all the concern about kisses on the mouth and labored breathing. I am blessed enough to have a nurse here with us while at work. Kaav is healthy and I don’t even touch her without washing and sanitizing myself and everything and everyone that comes into contact with her.

It wouldn't be the last instance in which she'd have to defend herself. Later, she posted a (pretty awesome) photo of herself lounging on the couch in a dress and sneakers. However, people took issue with this as well, claiming it wasn't "age appropriate."

“Oh I’d loooove to hear what you think is age appropriate,” People reported as Union's comeback. “Please gimme allll the age appropriate fashion advise I didn’t know I needed in my life.”

It's another bout of refreshing honesty from the actress, who has on multiple occasions been brilliantly transparent about her journey to motherhood; at one point sharing that she suffered "8 or 9" miscarriages, according to ABC.

"For three years, my body has been a prisoner of trying to get pregnant. I've either been about to go into an IVF cycle, in the middle of an IVF cycle, or coming out of an IVF cycle," she said in her book, "We're Going To Need More Wine." However, the story does have a happy ending as she utilized a surrogate to carry her daughter for her.

After everything the actress has been through, it's unbelievable that she'd have to defend herself from criticism over such incredibly innocuous behaviors, but such is the digital age. It's just a reminder to cut women — and mothers — a break, because despite the relentless scrutiny, we're all just doing the best we can... Union included.