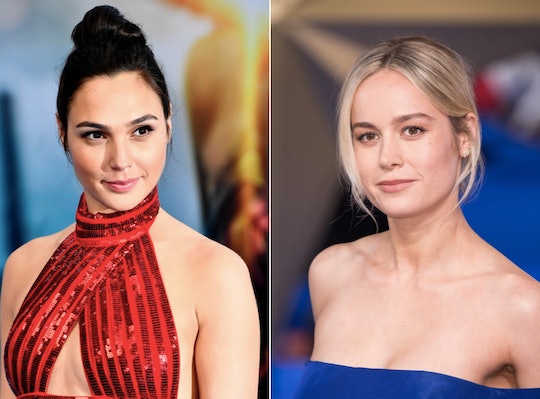 Few things make me happier than a strong woman supporting another woman. Especially if they are subtly being pitted against each other in the media, as is so often the case. It seems like not everyone got the memo that women were all going to start holding each other up instead of pushing each other down because that's such a boring, old-fashioned thing to do. Fortunately, Wonder Woman's Gal Gadot is far from an old-fashioned gal (that was on purpose). In fact, Gal Gadot shared a message to Brie Larson, who stars in Captain Marvel, and it proves Wonder Woman and Captain Marvel can be superhero best friends and work together to save the galaxy.

Captain Marvel opened in theaters over the weekend, becoming the first female lead superhero film in the Marvel Cinematic Universe since ever, according to CNBC. And it did incredibly well, coming in a tight second behind last year's Black Panther for the biggest box office opening weekend for a Marvel origin story, as CNET reported.

It was a huge weekend for the film starring Larson, Samuel L. Jackson, and of course Goose the Cat, especially considering how many trolls tried to sabotage the movie with phony poor reviews, as noted by People.

One person who had no interest in sabotaging the film? Wonder Woman herself.

Gadot shared a beautiful piece of fan art by 17-year-old artist Maxy Artwork, according to BuzzFeed, depicting the two superheroes standing side-by-side with their arms linked. She included a shoutout to Larson that read "I'm so happy for you sister!" and now this is the movie I want to happen please.

Ever since Captain Marvel came out some people have been taking to social media to debate which female superhero they like more, because I guess it would be just wacky to like them both. It's a little too close to the whole Kate Middleton/Meghan Markle debate that has raged on uselessly, if you ask me.

Gadot is not even bothering with that nonsense. Probably because she can rise above it what with playing Wonder Woman and herself enjoying a massive amount of success as a rare female superhero in a male-driven cinematic universe, as Entertainment Tonight reported.

Gadot wasn't the only woman to congratulate the creators of Captain Marvel on their success. Patty Jenkins, the director of Wonder Woman, also shared a tweet of appreciation. "Congratulations team Captain Marvel! Can't wait to see it and our whole WW crew wish you a great weekend," she wrote on Twitter.

And finally Anne Hathaway, none other than Catwoman herself from The Dark Knight, sent out her congratulations. Which has me thinking that these women could essentially make a movie together that would be perfect, right? As BuzzFeed reported, Hathaway posted a message on Larson's Instagram wall that read, "You know what I loved most about seeing @captainmarvelofficial (among all the things I loved about Captain Marvel)? Seeing YOU up there! So impressed and proud, sis, you did it! Now go get Thanos."

This is the way it's meant to be. Successful women celebrating other successful women. That's definitely the best superpower out there.