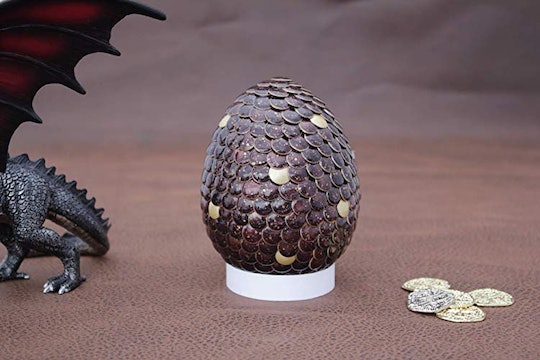 Ah, gender reveals. Whether you love 'em or hate 'em, you have to admit: A lot of time and planning goes into orchestrating the perfect surprise. And some couples go all-out when it comes to announcing the sex of their unborn child. Sure, you could go the traditional route with cake, balloons, or confetti. Or, you could go big and celebrate your favorite TV in one fell swoop. Because apparently, Game of Thrones gender reveals are a thing — and dragon eggs are of course involved.

On April 14, GoT Season 8 premiered, and all was once again right in the world for die-hard fans of the series. In fact, the return of the show was pretty much all you heard/read about leading up to that Sunday evening. If you're currently expecting a baby — or plan on adding a little one to your family in the near future — and love all things GoT, then this gender-reveal dragon egg is definitely something to consider.

They're 45 bucks on Amazon and simply magical. Each egg is handmade with 400 color-changing scales, according to Pure Wow. At room temperature, the scaly eggs are black, according to PopSugar. But when heated up to at least body temperature — with your hands, warm water, a hair drier, etc. — they turn either blue or pink! (Bonus: The scales turn back to black when they cool down; so you can do the reveal over and over again.) The effect is super cool. Not to mention, it's the perfect tribute to GoT.

One Instagram user shared a video of the egg in action in November, 2018, ahead of the Season 8 premiere. "Randall and I would like to announce that we are having a baby boy!" they wrote. "We can’t wait to hold our little man in April! Watch the entire video to see the egg change color. 🤰🏾👶🏽🐉Also @gameofthrones final season premiers in April!" Check it out for yourself!

Other GoT fans have come up with creative ways of incorporating their favorite show into their gender reveal. Like this video of an epic twin reveal.

Or there's these tasty GoT-inspired cupcakes. "My dragon egg cupcakes for our gender reveal last night were a big hit!" one Twitter user wrote.

Another person tweeted a photo of their gender reveal cake. Except, instead of blue or pink icing on the inside, it was green! They wrote, "Had a baby gender reveal cake for #GameofThrones tonight — IT'S A DRAGON!"

Honestly, using dragon eggs isn't even the most bizarre gender reveal trend out there right now. If GoT or cutting into a cake with blue or pink icing aren't your thing, then why not try gender reveal lasagna? According to People, a restaurant called Villa Italian Kitchen will make a pan of lasagna for your gender reveal party — complete with either blue or pink dyed ricotta cheese.

However you choose to do it, there are endless possibilities if you choose to make a big deal about revealing the sex of your baby. Considering the popularity of Game of Thrones, I'm willing to bet these dragon eggs will be selling like crazy.