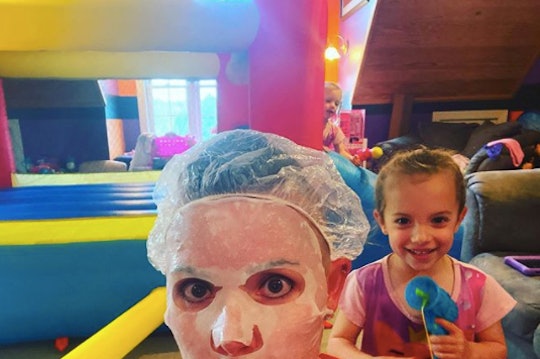 Those who ordered pallets of toilet paper in February are living in 2020, but a population of parents on Instagram with a Robocop-like ability to see the future are living in 2050 with large inflatable bounce houses parked in their living rooms between the fort made out of bed sheets and the tiny monogrammed Pottery Barn armchair as a pandemic rages outside.

It began with The Riveter's Amy Nelson, who posted videos of a bounce house being inflated in her basement in late March, and I have now spied multiple bounce houses on the Instagram stories of people I follow as Amazon deliveries make their way into the suburbs of America, mid-lockdown. It's perfectly logical line of thought: kids are bouncing off the walls? Get them something to rebound off.

"Queen of isolation," wrote one mother on a photo of her child's indoor jumping castle, the turrets of which reached toward the ceiling. "This is how we quarantine," 'grammed another parent whose child was mid-bounce, trying to dunk a basketball in the living room. It's the parenting hack that only a select few geniuses thought of in time to beat the online delivery backlog.

Mom Amanda Kettering issued a PSA on April 9 to "all my mom frans" stuck in their homes trying to survive parenthood and self-quarantine. "You need 1. A bounce house to contain the chaos (for a few minutes) 2. A face mask 3. Hair dye 4. A double fizz," she captioned a photo depicting all of the above.

The trend is real. Glimpse, a self-proclaimed "data trend" website, has the data to back it up: "inflatable pool" interest has risen 235% over the last 30 days. People need ways to contain their children, and when it comes to an inflatable, it's go big or go home. (As in go home inside your bouncy house because it's basically social isolation from your social isolation.)

A quick Amazon search for "bouncy house" yields 334 results. But that first page alone proves just how popular the item has become. Nearly every bouncy house listed is only available through a third-party seller, and the ones offered by Amazon Prime come with limited stock warnings. In one search result that literally blew my mind, a $1,300 bouncy house (that costs $100 to ship) is one of only 12 left of this particular brand and model. Romper reached out to an Amazon rep for more info on how bounce houses are trending, and they directed me to the bestseller page, which is updated hourly. At the time of publishing, an inflatable play center is #28 in the best-selling toys and games list.

There's also a significant price increase on some bounce houses. On the Walmart website, the Little Tikes Shady Jump 'n Slide Inflatable Bounce Room is available for $299.99. The item appears to still be in stock, and can be shipped for free or picked up in the store. The same bounce house is $355.59 on Amazon through a third-party seller, and has a delivery window of eight days, two weeks from now.

I actually bought it on like day three of quarantine because I could feel they needed to burn some energy.

It sounds like such an insane thing to buy — an entire bouncy house! — but for some parents of small children who have energy to burn, it's been a lifesaver. One friend described to me her backyard, which now has a bouncy house and a giant inflatable water slide, as their own "family theme park." She sends her kids outside in the morning, serves them lunch in the bouncy house, and lets them go up and down the inflatable water slide until they're ready to pass out.

Lindsay N., a mom of two in California, bought an L.O.L. Surprise Jump 'n Slide for her daughter's "iso birthday," and also to help her kids get some exercise. "I actually bought it on like day three of quarantine," she says, "because I could feel they needed to burn some energy."

Three days! That's all it takes before every parent in every corner of the world is ready to throw their hands up to the Walmart gods for an inflatable kiddie corral.

"We decided to get our little guy a indoor bounce house for Easter... Due to the quarantine, he got it early!! Look at that face. Not real sure how we are going to get him out of it at the end of the day!!" Instagram user @thamommaspot wrote on a post of her kiddo bouncing in his primary-colored castle.

And Swati Misra wrote on her Instagram @misrawellness that while the hours before nap time once felt like "quicksand," it helps to be outside with her kiddos. Bouncing.

Guys, I'm thisclose to sending my mother-in-law a text with a link to the Fisher-Price Bouncetacular Inflatable Bounce House to induce the guilt she must feel in not helping me raise these hoodlums. It's Walmart's bestseller! It's on sale from $229 to $189! It's going to change everything for me.