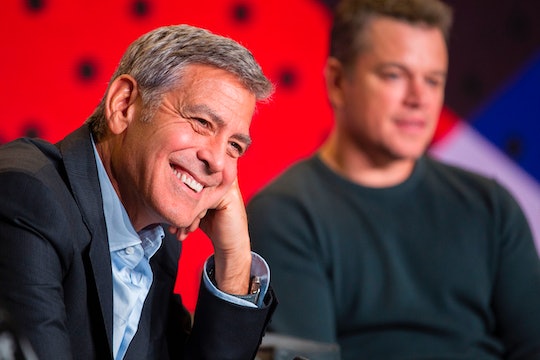 George Clooney Talks About The Reality Of Having Twins, & He Is So Right

Back when I was a new mom venturing out in the world with my infant twins, I learned a few things pretty quickly. For one, the sight of my double stroller would almost always lead at least one person to tell me that I must "have my hands full" (you have no idea, supermarket stranger). Another is that most people seem to think that the only real difference between a twin mom and most moms-of-two is that we were lucky enough to only have to go through labor once (uh, no). But in a recent interview with The Daily Mail, new dad George Clooney spoke about the reality of having twins, and while he's certainly not the first person to speak honestly about how difficult it really is, the fact that he set the record straight was super validating (not to mention a huge public service on behalf of all the other parents of multiples out there).

Clooney may have spent most of his adult life as an avowed bachelor, but these days, he's happily raising his 3-month-old twins, Ella and Alexander, with his wife of nearly three years, Amal Clooney. And though the actor recently left his family behind in L.A. for the first time to attend the Toronto International Film Festival in support of his new film, Suburbicon, it's clear that they weren't even sort of far from his mind.

According to The Daily Mail, the actor quickly took to gushing about his kids in the interview, and even pulled out his phone to show off some cell phone pics, in what sounds like a classic dad move. But while it seems pretty obvious that he was loving fatherhood, he wasn't holding back about what having two babies at once is really like (hint: it's definitely not the two-for-one-special most people think it is).

For one, Clooney admitted that the sleep deprivation is intense, and joked, "I cry more than they do. I cry four times a day right now, because I’m so tired." And while being overwhelmingly exhausted definitely isn't unique to having twins (having one baby is super tiring too), he did say that he wasn't exactly prepared for how much extra work having two infants actually is:

I wasn’t completely unaware of what life would be like [as a dad]. All my friends have kids and I’m godfather to about 20 of them, so I knew what I was in for. [But] the surprise for me was how much more complicated twins is than just the one — it’s not just twice as much work, it’s more than that.

That's a sentiment that parents of multiples can definitely appreciate. After all, while it's totally reasonable to expect that having twins (or triplets, or quads, etc.) would more or less just be a matter of doing everything twice (or three times, or four times) over, once you're in it, you quickly learn that it feels so much more complex.

That's because, well, it's not merely an issue of an increased workload. While it's possible to breastfeed twins simultaneously, for example, it can be a tricky skill to actually master, and if you're bottle feeding, then the reality is that you can't really hold and feed both children at the same time (and if you have more than two, that's obviously a given!). Even though my husband took a three-month parental leave after our twins came home, there were many, many times, when I had to just leave one of our babies in a swing or lying on a play mat while I fed and cuddled the other, and I was surprised at how guilty I felt that I couldn't give both of my babies attention at the same time — especially when it meant that the one not behind held started to cry.

Unfortunately, that reality extends to pretty much everything — no matter how hard you try to be as focused and present as possible, being a twin mom kind of feels a little bit like you're always falling at least a little bit short (and I feel that still, even though my kids are almost 5 years old). And when you're already sleep deprived? Well, let's just say that, like Clooney, I probably also gave my kids a run for their money in the crying department.

At the same time though, Clooney acknowledged that despite the extra challenges, being a twin dad is still pretty awesome — especially given the fact that he hadn't even really expected that fatherhood was even going to be a part of his life. He said,

All of this is icing on the cake. Look, I’m 56 years old and I didn’t think it was going to happen for me. I thought my life would be focused on my career, not relationships, and I’d sort of accepted that.

And then I met Amal and I thought, 'Well, I have this incredible relationship, this is wonderful.' And then ... all of a sudden we have these two knuckleheads around who make me laugh every day.

Being a parent of twins is challenging, but the flip side is that the amazing moments are also amplified, which certainly helps. It is at least a little bit frustrating though when others assume that having more than one baby at a time is more or less the same as being a singleton parent, and it's why George Clooney's confirmation that, actually, having two babies is really hard (even when you're a huge movie star who is able to afford much-needed help with childcare, not to mention household tasks like food prep and the never-ending laundry that two babies manage to create) is a super helpful message. And as a fellow twin parent, it's one I absolutely appreciate.