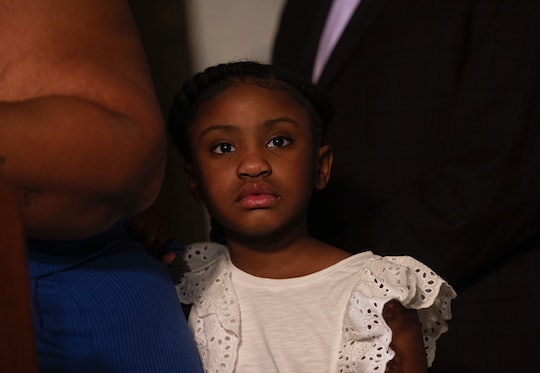 As people from New York City to Los Angeles and even abroad have taken to the streets to demand justice for an unarmed Black man who died in police custody after a white officer knelt on his neck as he pleaded that he couldn't breathe, George Floyd's 6-year-old daughter daughter Gianna has opened up about her dad. In a heartbreaking interview with Good Morning America, the young girl talked about her memories with her dad and her pure love for him was palpable.

"She doesn't know what happened. I told her that her dad died because he couldn't breathe," Gianna's mother Roxie Washington said while sitting next to her daughter during the interview with Good Morning America.

"I miss him. He played with me," Gianna chimed in. Washington added that Gianna didn't have to find other friends to play with because "daddy was going to play with her all day long."

On May 25, Floyd was arrested on suspicion of using counterfeit $20 bill in Minneapolis to buy cigarettes, according to The New York Times, and viral footage of what happened after, documenting Floyd's last moments, has outraged the nation. The officer who had his knee on Floyd's neck for nearly nine minutes, Derek Chauvin, was fired from the Minneapolis Police Department and has since been charged with third-degree murder and second-degree manslaughter, according to the Star Tribune. The three other officers who were on the scene — Thomas Lane, J.A. Keung, and Tou Thao — will also reportedly be charged in Floyd's death, the Star Tribune reported Wednesday.

Gianna might not know much about what happened to her father on May 25, but she does the world is paying attention. In a viral video captured at a demonstration in Minneapolis over the weekend that's been widely on Twitter and Instagram, Gianna looked around and said: "Daddy changed the world."

Washington explained in her interview with Good Morning America that Gianna hears people saying her father's name in the streets. "She said 'I hear them, I hear them saying my daddy's name." And while Floyd's death has had a massive impact on the rest of the country, the reality is that he will not be there to watch his daughter grow up.