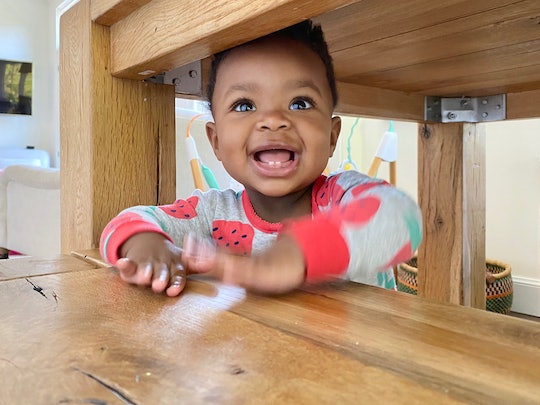 In terms of baby milestones, few things are more exciting than watching your child finally learn to walk. It's even exciting to watch somebody else's child learn to walk... not to mention adorable. So here's some pretty great news: Thanks to a brand new video, everybody can watch Gerber Baby 2020 Magnolia Earl's very first steps (both exciting and adorable). The darling girl — Gerber's first-ever adopted spokesbaby — moved from infant to toddler this week and her satisfied smile is a reminder of the exquisite joy of watching a child grow.

In case you missed the original announcement, Magnolia Earl was adopted after the Earl family got a call from the adoption agency they were working with on May 9th, 2019, about an expectant mom who was in labor and wanted to talk to them. Courtney, Magnolia’s mom, said the family immediately got in touch and were able to connect with the birth parents. "A few hours later, this sweet baby girl was born,” Courtney said. Magnolia joined sisters Charlotte (8), who is also adopted, and Whitney (12) at their home in California.

The rest, as they say, is history. Courtney called Magnolia's Photo Search win an "opportunity to tell Magnolia’s story and shed light on all the beautiful and different ways families are made." In a statement, Gerber said that Magnolia “captured the hearts of the judging panel with her joyful expression, playful smile and warm, engaging gaze.”

That joyful expression, playful smile, and warm, engaging gaze are in full effect (and then some) in this ridiculously charming video of Magnolia's very first steps ever... in her entire life:

Seriously, does it get any cuter than that? (The answer is "no," it does not.) And as any parent knows, the fact that Magnolia's actual first steps were captured on video is pretty much a miracle. Most babies start walking between around 9 and 18 months of age (so Magnolia is right on schedule), but you never really know when your little one will make the transition from "cruising" to walking.

So it's super lucky that Magnolia's first moves have been preserved for posterity. It'll be such a sweet memory for her family to relive over the years... and thanks to social media, for the rest of the world, too. From the looks of Magnolia’s wonderful walking skills, this girl's gonna be running in no time.

More Like This
25 Winter Solstice Baby Names For Your Magical Little One
Is It Good For Babies To Be Exposed To Germs? It’s Complicated
40 Lovely, Lively, Lavish Girls Names That Begin With “L”
Baby Growth Spurts: When They Happen & What To Expect