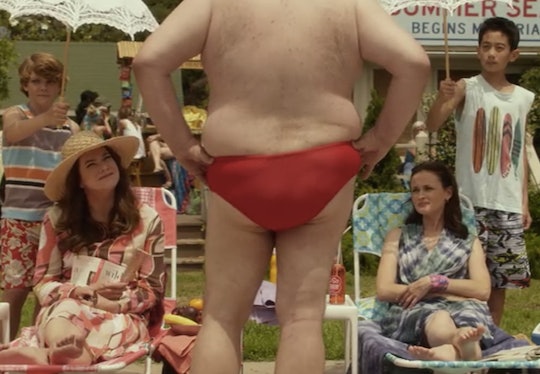 'Gilmore Girls: A Year In The Life' Highlights An Uncomfortable Truth About Fat-Shaming

If you and your bestie have ever mocked a "smelly" housemate or wondered how that celebrity could've possibly stepped out of the door looking so shabby, you know that we tend to bond with people by making jokes at others' expense. Often, fat people are at the receiving end of this communal bullying, because larger people are often deemed undisciplined, unhealthy, and unattractive by society at large. This was something I was acutely reminded of as I watched Gilmore Girls: A Year In The Life's "Summer" episode, in which we are introduced to Back Fat Pat, the pool-goer who exists purely to be fat-shamed by Lorelai and Rory Gilmore.

Back Fat Pat (nicknamed such by the two women) is your standard headless fatty, or a plus-size character who's depicted without showing his face. Lorelai and Rory behave undeniably disgusted by his existence. Alternating between averting their gazes and pulling what feels like the classic "you're so fat, I want to vom" faces, both Pat's body and their discomfort at it are meant to serve as comedy.

What sticks out to me about this moment isn't that a fat person's body was mocked on an incredibly popular television show. (This, I'm afraid, most fat people are accustomed to.) What sticks out is that the scene served as a bonding moment between Lorelai and Rory. Rather than try to teach her 30-something-year-old daughter that humiliating people for their bodies is unacceptable, it seems like Lorelai encourages and partakes in the mockery. And as a result, the moment feels like a classic example of fat-shaming as learned behavior, something we're taught is OK by our parents, relatives, friends, or peers.

The takeaway isn't that Lorelai and Rory should be judged for their actions. It's that "fat bodies are funny and weird, so it's OK to laugh at them."

Of course, Lorelai and Rory are fictional characters meant to represent real, flawed, and authentic people you might encounter in day-to-day life. Even though they're often hailed as feminist heroes, they are not supposed to be perfect, so it makes sense why their characters would be susceptible to fat-shaming thinking. Unfortunately, part of my discomfort lies in the fact that viewers might not think of their words and actions as problematic or cruel. The takeaway isn't that Lorelai and Rory should be judged for their actions; it's that "fat bodies are funny and weird, so it's OK to laugh at them," which only contributes to the perception that fat people are unworthy of basic human dignity.

Lorelai Gilmore is far from the only parent in the world to teach their kid that fat-shaming is cool (or at least, that fat-shaming in front their kid is OK). Two years ago, when I weighed approximately 80 pounds less than I do now but was still technically considered plus-size, I wore a low-rise bikini to a Spanish beach, which proudly displayed my back boobs, leg cellulite, and muffin top. It certainly broke the rules of what a fat person was "supposed" to wear on the beach.

Although I expected to be mocked for my ensemble, I certainly didn't expect a father of two to eye me up and down, then turn to his children and say, "Mira la vaca burra," which translates literally to, "Look at the cow donkey." The kids stared at me for a few moments, presumably to try to gauge what reaction their father was looking for. Then they chuckled.

At that moment, I thought of how I had also internalized fat-shaming while growing up. Even though I was always a chubby kid, fat-shaming was still something I was taught to do by the elders around me. I learned to think of fatness as a deplorable quality when my thin mother put on a dress, looked in the mirror and criticized herself for looking so fat. I learned to hate the way fat rolls looked when my aunt looked at a larger person and mused, "I just don't know how somebody could let themselves go like that." I learned to hate my stomach when a hairdresser in Colombia poked my belly flab and told me how cute I'd look without "all that," and I learned to hate myself for being so "unhealthy" from doctors who took one look at my body and refused to treat me.

Adults inarguably perpetuate the vicious cycle of fat-shaming. But all adults were once kids: Kids who probably only ever saw fat people on TV when they were playing the villains or the unintelligent sidekicks; kids whose teachers warned them about the obesity epidemic, while not teaching them very much about the logistics of health or fitness or food; or kids whose slender, beautiful moms pointed out the fat man at the pool and urged their daughters to look at his despicable form.

We can also remind them, time and time again, that no person deserves to be laughed at or mistreated for their appearance.

Fat-shaming isn't something that's innate. It's learned. It's got to be carefully taught and passed down, from one generation to another. And if fat shaming is learned behavior, however, then it can also be unlearned. As with any marginalization of an entire group of people, coming to terms with the fact that said marginalization is cruel should, in theory, be reason enough to reevaluate it. Analyzing the myriad ways size discrimination affects people — how it affects fat people's incomes, access to proper healthcare, and even their rates of criminal conviction — should, in theory, motivate us to do better.

One way we can do better is by teaching our kids that fat-shaming is unacceptable, regardless of the circumstances. We can keep fat-shaming out of the house. We can refuse to use the word as an insult and instead use it neutrally or positively, by never mocking people for their bodies or by offering our children body-positive imagery. We can also remind them, time and time again, that no person deserves to be laughed at or mistreated for their appearance.

Our efforts might not be enough to dismantle fat shaming entirely. But they can be a step towards spreading more progressive and inclusive thinking. That counts for something. Actually, it counts for a lot. And someday, hopefully, it'll mean that when our kids encounter fat people in bikinis or Speedos at their public pool, they'll think nothing of it whatsoever.