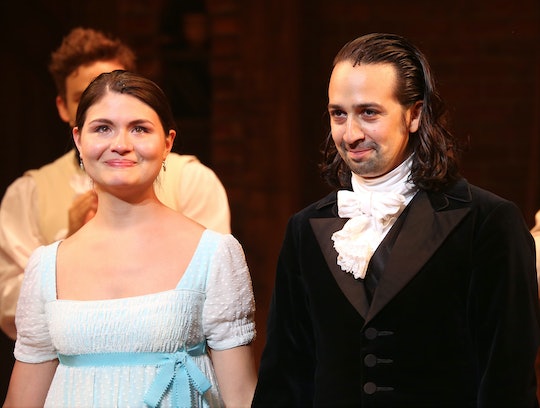 Little Girl Excitedly Says "It's Me!" While Watching Phillipa Soo In 'Hamilton'

When you're little and sitting in front of the TV watching something that speaks to you, it's so much more powerful when you see someone who looks like you, too. Like this little girl watching Hamilton and excitedly saying "It's me!" when she watched Phillipa Soo on stage. She was clearly mesmerized by seeing someone who she felt looked like her, and even wanted to get to the dancing as soon as possible to live out her best Hamilton dreams.

On July 5, Soo shared a video of a little girl named Jenna, who was watching her perform in Hamilton. Soo — who is Chinese-American, according to The Los Angeles Times — plays the role of Eliza Hamilton in the wildly popular musical, which just became available as a film on Disney+ on July 3. In the video shared on Twitter, the young Asian girl points at Soo and says over and over again, "It's me!" She even says at the outset of the video, "Let's dance," because when you find a character that speaks to you as a kid, you really need to get down to the business of dancing it out right away.

"Little Jenna here is exactly why #representationmatters," Soo captioned the video. "I am so grateful for this show, that so many young people can watch this show and say 'It’s me.'"

The charming video has been viewed more than 2.3 million times, and several people took to Soo's tweet to share stories of their own child's excitement over seeing someone who looked like them in media.

One parent tweeted, "Brought tears to my eyes. My youngest is Japanese and she was almost 2 when Mulan came out. She saw herself, she practiced spitting like Mulan, doing everything like Mulan."

Another woman remembered having her own moment of feeling represented on screen as a child, when the singer Brandy played Cinderella in the 1997 Disney movie. She tweeted, "Oh I want to cry. Representation does matter. When I was little ... Brandy as Cinderella let me know I could be a princess too."

When Hamilton writer Lin-Manuel Miranda shared the video on his Twitter feed, even more stories came out about kids watching the musical and finding true joy in seeing people of color being represented. "My son is Puerto Rican, and reacted the same way when he saw a picture of you the first time: 'Hamilton looks like me!' Representation is so, so important. It’s part of what makes this show so magical," one parent commented.

It wasn't just children either; one woman's tweet was a reminder that representation has long been lacking. "I’m a little over a decade OLDER than @PhillapaSoo and when I saw her for the first time I was like 'That girl looks like me!'" she wrote. "That’s how often I’ve seen myself."

It's about time little girls like Jenna have someone they can look up to on screen and joyfully say "It's me!"

More Like This
The Hocus Pocus 2 Soundtrack Is A Spooky Mix Of Old & New
Is 'Hocus Pocus' Too Scary For Kids Under 5?
Witchy Vibes, Salty Language, & More: What Parents Need To Know About Hocus Pocus 2
You Can Stay At A ‘Hocus Pocus’ House On Airbnb — And It’s In Salem!