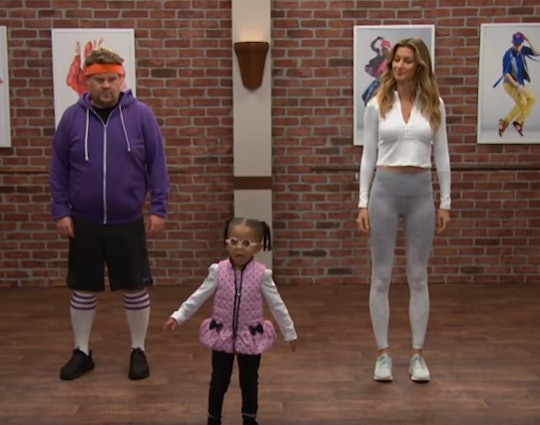 When you think of Gisele Bündchen's workout routine, I imagine you are probably thinking the same thing I am; a punishing, grueling mix of cardio and strength training that I'm sure I never want to see. And sure, this might be true for the model most of the time... but every once in a while a girl needs to change up her routine. And what better way to change things up than incorporating some fun friends like James Corden and... toddlers? Sounds odd, but Bündchen and Corden's dance workout with toddlers looks to me like the perfect antidote to a boring gym routine. And I'm not going to lie, guys, it also looks like it's a pretty decent level of cardio. Which probably comes as no surprise to every parent who has had to chase toddlers around for a day.

The Late, Late Show host decided to try his hand working out alongside Bündchen for a potential workout during Tuesday night's episode. Because, as he put it in the video, "I know we're both in amazing shape," but also because he was interested in trying a workout with some new instructors. To, you know, challenge himself because he "heard this class is insane. These instructors... they're crazy."

And they're also all around 3 years old from the looks of it.

If you've ever danced with a toddler, you know what Corden and Bündchen can expect in their "toddlerography" class; a wild mix of moves that make almost no sense other than the tiny instructor gets a kick out of them.

Some of the little instructors are shy, moving a little from side to side as the talk show host and model mimic their moves perfectly. While others, most notably a little boy who pulled out moves like the Running Man as though he was a tiny professional dancer, got seriously into it.

And both Corden and Bündchen were game to go along with the moves. Perhaps because they're both parents themselves and know a thing or two about dancing with toddlers.

At the end of their session, which included such moves as throwing yourself against the wall, chasing each other around the room, and sometimes just giggling and bouncing a little, the two adults were exhausted.

Bündchen, who is married to New England Patriots' quarterback Tom Brady and mother of two children: 8-year-old Benjamin and 5-year-old Vivian (as well as stepmom to 11-year-old Jack Moynahan) found that even her boundless energy was taxed. When the two sat down for a nice cooling bit of slime to enjoy apres-workout, she told Corden, "You weren't kidding, that was hard."

The toddler hanging out with them, however, was laughing his head off and looked like he was ready for at least six more sessions.

Which tells you everything you need to know about toddlers and exercise and life in general.