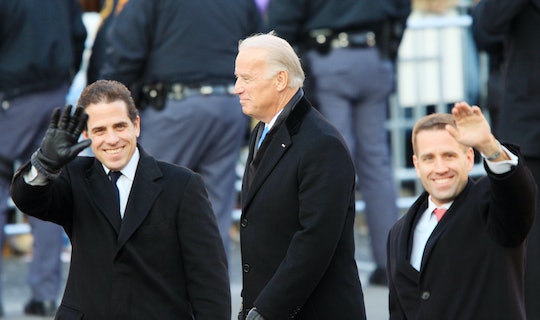 Listen. No matter what type of disagreement I get in with family or friends, the one thing you don’t do is come for my kids. And that won’t ever change. Watching President Trump maliciously attack, accuse, and discredit Joe Biden’s son Hunter Tuesday night during the first presidential debate made the mama in me rise up, and many other moms around the country were ready to pull their earrings off, too.

It was Biden’s turn to speak, and he began to reference the disrespectful comments Trump has reportedly made regarding those who have served in the military, like allegedly calling them “losers and suckers” among other things. Both of Biden’s sons served, and, referring to Beau, who died of brain cancer in 2015, he said pointedly and directly at his opponent, “My son was in Iraq. He spent a year there. He got the bronze star. He got the Conspicuous service medal. He was not a loser. He was a patriot and the people left behind there were heroes.” Consistent with his behavior of the evening, Trump immediately interrupted, feigning confusion over which son Biden was talking about. “Hunter got thrown out of the military," he shouted. "He was thrown out, dishonorably discharged for cocaine use.”

Even as Biden interjected, calling Trump's words “not true,” (Hunter Biden was discharged from the military, but not dishonorably — and he publicly acknowledges his mistakes), Trump continued his attack on Hunter, veering wildly from disparaging Hunter’s personal struggle with drug addiction to accusing him of unethically “making a fortune” from dealings with foreign countries (an oft-repeated accusation that has been thoroughly discredited).

Instantly, political parties no longer mattered. Biden is a parent, and I wanted him to take the gloves off. If I know anything about being a mother I can say this was a moment when we all wanted to fight with Biden. Momma bears all over the country let out a battle cry — as evidenced by the immediate flurry of social media posts calling out Trump’s attack last night. I caught up with some moms IRL from around the country Wednesday morning to see if everyone was as fired up as I thought.

Amanda G., a work-from-home mom of two toddlers in Florida, tells me her immediate reaction was, “Wow – he really just went there.” She cringed at Trumps' behavior, saying, “I know exactly how I would feel if someone attacked my kids. That was not the time nor the place. That was a low blow and totally inappropriate."

Kids are off limits. This is not okay.

Maryland resident Tarolyn T. is a police department program coordinator and mom of three. She says, “Kids are off limits. This is not okay.”

New York resident and mom of one, Kristen S. put action behind her outrage. She immediately told her husband, “I am donating every last dime on our ridiculous stimulus card to Biden and to the candidates running against McConnell, Collins, and Graham.” (Interesting to note: $3.8 million was raised for Biden’s campaign during the 10-11pm hour, post-debate.)

Kristen told me, “It felt good to think that the money 45 sent us went to supporting his opponent.”

With the recent reveal of the measly $750 he reportedly paid in federal income taxes in 2017, Trump should be the last one to speak on unethical money practices. But that’s the least of his crimes Tuesday night. The purpose of a presidential debate is to represent how you can serve the American people better than your opposing candidate.

I’d like to believe it’s an unspoken rule that bringing someone’s child into the conversation is off limits, but this was just another clear display of insensitivity and lack of class on the part of our President. The unmeasurable loss Joe Biden has experienced in his lifetime (losing his first wife and their daughter, Beau and Hunter’s baby sister, in a 1972 car crash, and his beloved son dying of brain cancer) is vastly publicized, and taking a dig at him in this way is bad form, full stop.

Biden admitted that his son, “like a lot of people at home had a drug problem.” But he also acknowledged last night that Hunter (who also struggles with mental health issues) is diligent in his efforts to overcome his addictions. Right in line with everything we know about Biden being a supportive, loving parent, he added, “He’s worked on it, and I’m proud of him. I’m proud of my son.”

There was a collective mom cringe that happened in living rooms all across the nation in that moment, but Biden, instead of sinking to Trump's level, redirected the conversation back to the main focus. “This is not about my family or your family," he said. "It’s about the American people.”