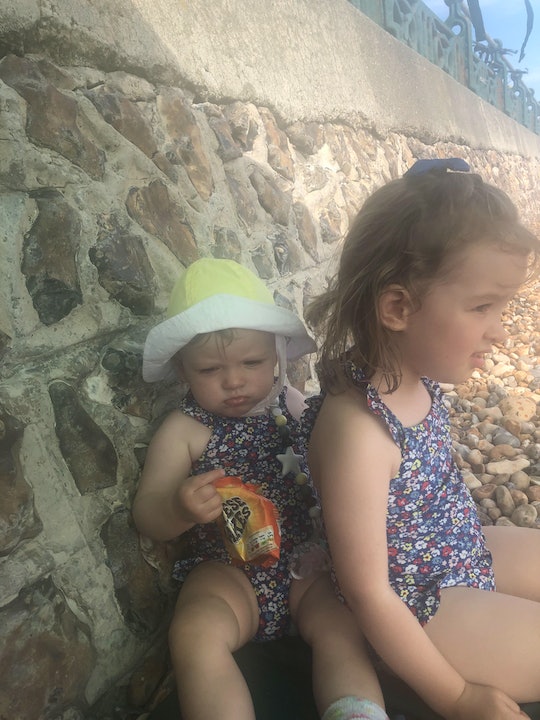 Goodbye To The Hellscape That Was Summer With Babies!

I usually love the beach. A water baby from the start, I will very rarely pass up the opportunity to dive into a pool, take a warm bath, float in the sea, or even stroll in the rain. For me, summertime was once synonymous with beach days: lazy afternoons, sandy toes, oversized towels, and the scrumptious aroma of cocoa butter suntan lotion. It was about re-balancing myself, and finding some semblance of peace after going through seasons marked by gloominess and stress. It was magical. Until I had children, that is. Now, summer with babies and toddlers is little more than a treacherous hellscape. A time to forget as autumn finally makes its caramel-colored way back into our existences.

My husband and I had exactly two beach trips this summer. The memory that sticks out from the first is practically wrestling with our 2-year-old until she submitted to having sunblock applied (if you can even call it "submitting"). Her dad held down her flailing limbs while I frantically squirted the tube of SPF all over her body. I never realized how strong my eldest actually is until that moment, when her kicks and punches were forceful enough to leave visible marks on my body. It kills me that she will not remember the lengths we have gone to to protect her from sun damage.

I remember very little about the second beach day. Only that my 1-year-old hated every damn minute. Much like she has seemingly hated every damn minute of these wretched three months. Her small cherubim face is quick to turn bright red whenever we leave the house. Her nose begins accumulating sweat. Her hair dampens in sticky perspiration. Her clothes stick to her tiny body. Her disposition changes entirely. She, my sweet babe, becomes a monster. An inconsolable little monster who does not allow anyone around her to enjoy all of the supposedly fun things warm weather has to offer — until, for a brief 15 minutes after a 1-hour fight, she falls soundly asleep.

Everything that is hard about raising small children only becomes harder in the summer. There are more open bodies of water for them to try to jump into. Indeed, every outing seems to be an opportunity for drowning — something we figured out quickly on our first "adventure" to the beach with two children. The tide suddenly came in so rapidly that my husband and I struggled to get to shore while carrying our as-yet-to-swim-independently daughters and trying to pick up all our sh*t before it was lost at sea forever. So much fun.

Meals are harder, too. My eldest doesn't seem to want to eat anything that isn't cold. Mainly, anything that isn't ice cream — and I can't even blame her. What's more perfect than ice cream in muggy weather? How am I supposed to tell her she's wrong when she so obviously isn't? How can anyone be a good parent under these conditions?

Getting the kids dressed on summer mornings has been no picnic, either. They don't want to wear clothes. My toddler tells me everything is itchy. "It hurts!" she will scream at me as I try an eighth or ninth outfit choice. "I don't want that one. HOT!"

I haven't been this happy since April.

As for sleep, what the hell even is that? I made the move from the U.S. to the UK in 2016, and with that decision, I forsook air conditioning. I am told Britain doesn't get hot enough in spring or summer to warrant AC, so most homes don't have it. Some offices and shopping centers might (if you don't live in a tiny northern town, which I do) but our old Victorian terrace house certainly does not.

And yet, since I've lived here, every summer has been hellishly scorching (global warming, amiright?). My kids have never really known the wonders of AC, but judging from their inability to cope with muggy nighttime heat, I do not doubt they'd be fans.

Honestly, there is nothing about summer that I am mourning since its swift departure last week. One day, I couldn't leave the house without a trusted spritz bottle (which I highly recommend for anyone needing periodic cool-downs throughout the day). The next, skies were grayer, temperatures cooler, life a little bit more bearable once more.

I have heard some complaints around me: comments about begrudging trips to the basement to dig out fall and winter clothes, comments about children not particularly liking putting on woolen layers, comments about the ocean being too cold to swim in once again, and the days no longer being sunny enough to enjoy.

Personally, I haven't been this happy since April. It is officially sweater weather. It's cool enough both inside and outside that my toddler will, once again, allow me to feed her soup and chicken nuggets. No one comes at me with the kind of vicious hatred only a high-energy, 28-pound creature can muster when you try sticking them into footed pajamas. My baby no longer screams an agonizing scream every time I dare pull her away from the fan. In fact, I don't need to keep the fan on at all anymore.

Some might say I'm dramatizing. Surely, there are perks to summer with small children. Surely, there were brief moments of joy amidst the chaos. Surely, seeing the beauty of those teeny, tiny footprints in squishy sand was enough to make up for all the hassle.

Nah. I'm good. To fall I say welcome. And please don't be such a stranger next year.

More Like This
How To Breastfeed A Baby With A Cleft Lip Or Cleft Palate
The Covid Vaccine For Kids Under 5 Has Been Sent To The FDA For Review
30 Easy Summer Activities For Kids That Work Rain Or Shine
Should Parents Consider Delaying Covid Vaccines Until Closer To School Starting?