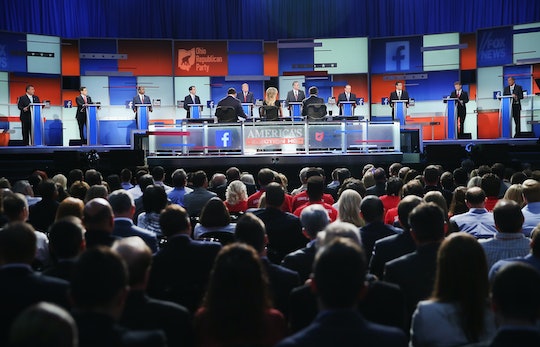 GOP Debate Audience Was Rowdy, & Here Are Their Most Dramatic Reactions

Picture it: The Venetian Hotel, Las Vegas, NV. It's the most rambunctious show in town. No, I'm not talking about WWE. I'm talking about the rowdy audience at the CNN GOP Debate Tuesday night, where the crowd got raucous AF. I mean, I know the candidates are entertaining, but the GOP crew got the peeps on their feet big time. I guess it's a sign that people care, right? And that's a good thing considering the social and political climates we're living in right now? I'm really good at finding silver linings, guys.

There was a lot of ~loud caring~ happening in the Republican debate audience — a lot. At one point, the audience booed Trump. At another, they actually heckled him. Someone in the debate audience was coughing repeatedly, freaking lots of viewers out. And the crowd was very generous with applause and standing ovations. When Rand Paul responded to Donald Trump's promise to shut down parts of the Internet, "If you're going to close the Internet, realize, America, what that entails: That entails getting rid of the First Amendment, OK?" the people were on their feet. I mean, thank god, right? You can't shut down the Internet, Donald. Or are you trying to beat China in the censorship game and throw out the Constitution?

All I can say is, thank you, audience for paying attention. Here are their three biggest moments from the GOP debate Tuesday night:

The Times Trump Got Booed

Discussing his strategy for fighting terrorism, possibly involving shutting down the internet, Trump said that the U.S. plan should be "getting our smartest and getting our best to infiltrate their internet." The audience booed vigorously, prompting Trump to respond, "I just can't imagine somebody booing. These are people that want to kill us, folks." The audience also booed when Trump attacked Jeb Bush pretty much right out of the gate.

That Time Trump Got Heckled

When Trump was answering a question about whether it would be better to leave Middle Eastern dictators in power, an audience member shouted something so loudly that he was escorted out, although it wasn't clear what the debate heckler said. Some thought he said something about "how Americans don't want more billionaire politicians" while others said it was, "The American people deserve clean and fair elections, not billionaire offspring." Either way, clearly this audience was not shy.

When Christie And Paul Went At It, And The Audience Egged Them On

When Christie was asked if he would shoot down a Russian plane that flies through a no-fly zone in Syrian airspace, he answered, “I would do it." Then, Christie called President Obama a “feckless weakling.” Paul then attacked Christie: “I think if you’re in favor of World War III, you have your candidate,” he said, and threw in a not-at-all veiled reference to Christie's George Washington Bridge scandal. The audience went wild.

I would have never've thought the GOP candidates could get people on their feet like they did, but that's the beauty of politics in action. You never know what you're gonna get.