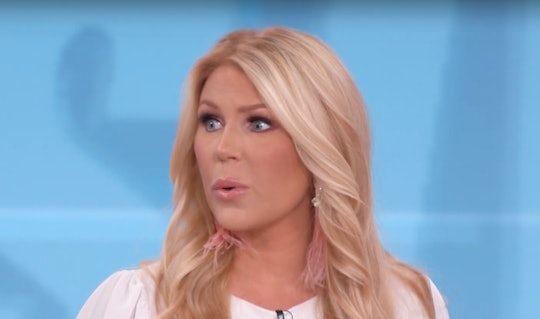 Pregnancy and childbirth are two of life's most precious, intimate and incredible experiences, but that doesn't paint the entire picture. It's also a raw, vulnerable, and highly emotional time, compounded by expectations put on new mothers to do everything perfectly and be smiling while you do it. Touching on just this, Real Housewives of Orange County's Gretchen Rossi opened up about postpartum depression in a candid interview that shed light on what she experienced and reminded new moms they're definitely not alone.

During an appearance on The Doctors with her partner Slade Smiley, Rossi shared what her experience was like after giving birth to daughter Skylar Gray, who the couple welcomed earlier this summer. First, Rossi joked that she wants to write a book called It's All A Lie, which would be an exposé about how the perfect Instagram mother does not exist.

"Legitimately, I had no idea what I was in for. I just thought, 'This is gonna be great.' You see Instagram, you see social media, you see the media making it look like it’s so perfect, and you just sit there and breastfeed your child and you look magically into their eyes. It was nothing like that," she shared during her appearance on The Doctors.

Rossi went on to talk about her experience with postpartum depression, saying that she went to her doctor to find out what was wrong and was surprised to get a diagnosis. "I really wasn’t connecting with [Skylar] at the very beginning," she shared, describing yet another common yet often undiscussed aspect of new motherhood. "Then I came to realize, I went to my pediatrician’s appointment and I was crying and broke down in that appointment, and my pediatrician said, 'You know, Gretchen, I think maybe you need to think about the fact that you might have some serious postpartum.'"

Though Rossi shared she was in denial at first — "I was like, ‘No, not me. I don’t have that. I’m happy! I’m such a positive person all the time,'" she said — she ultimately came to terms with the fact that having a child is a complex and life-changing experience. And the pressure to seem instantly blissful is both unrealistic and unhealthy.

"I was really struggling and having an internal conflict with the fact that I had this beautiful, amazing miracle baby and I just was having a hard time compartmentalizing how to manage my life now with this new baby," Rossi said.

Rossi certainly isn't alone. According to the Office on Women's Health, 1 in 9 new mothers experiences postpartum depression, which is defined as "intense feelings of sadness, anxiety, or despair that prevent them from being able to do their daily tasks" by the American College of Obstetricians and Gynecologists (ACOG). Like Rossi did, the ACOG recommends that if you think you may have postpartum depression, it's important to see your doctor or a trusted health care provider as soon as possible.

Rossi has also opened up about both the highs and lows of new parenthood with friends and followers on Instagram. In early August, for instance, she shared a photo of herself breastfeeding her daughter and shared how difficult the experience was for her — as it is for so many new moms.

"This pic right here is how I imagined in my mind that breastfeeding would be, beautiful, peaceful, maternal, and glorious... me just calm and relaxed, looking and feeling great all the while bonding with my precious baby girl staring into her eyes while she feed from my breast... Boy was I ever wrong," she began, continuing to explain that she felt exhaustion, guilt, and as though she was totally ready to give up on it.

At the end, Rossi encouraged other moms to share their breastfeeding experiences in the comments, which many did. "Let’s all help uplift each other up as woman and Moms who are just trying to do our very best, at one of the toughest jobs in the world," she wrote.

Given just how challenging new motherhood can be, it's so refreshing that more and more individuals who have a platform, like Rossi, are opening up about their own experiences so more women know they're not alone.