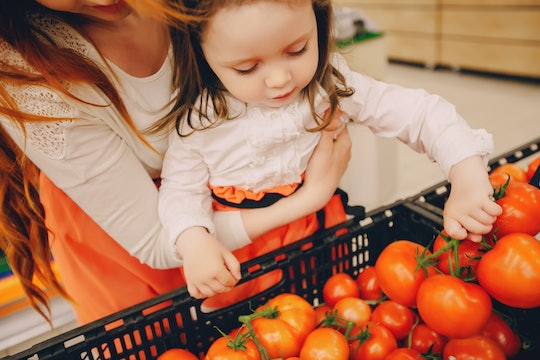 As a young woman, I found going to the grocery store a soothing weekly event. But then my children took that from me, just like they took away my boobs and all my money. Let me talk to you about grocery shopping by yourself versus with kids, because even though it's technically the same thing errand it could not look more different.

When I was little, I thought being an adult would be a magical time when I could do whatever I wanted. I quickly learned this was not the case and everything I'd ever thought about being a grown up was an awful lie... except for grocery shopping. Every Sunday night, I would leisurely stroll through the aisles and think about the week ahead via the meals I planned on the fly. Whatever tickled my fancy I would buy.

Then I had kids.

Honestly, for a while, it was no big deal! I'd just put on the Moby Wrap and let all the old people come up to me and coo over my usually sleeping little angel! It was like being a parade float and my son was riding at the very top, just waiting to be adored by throngs of fans. Then he got older and mobile and didn't sleep and discovered whining. Then I had another baby because, apparently, I love making things harder for myself, and it was around this time that grocery shopping became a punishing hellscape that I dreaded and pushed off for as long as possible.

I'd like to say it's gotten better now that both my kids are in grade school... but no. My kids are normally pretty well-behaved, sure, but something about supermarkets turns them into beasts whose sole purpose is to irritate me. So I've resigned myself to the fact that I'm damned for all time... or at least until they're old enough to be left home alone while I go out, at which point I will worry the entire time I've gone that they haven't burned the house down.

But every now and then there comes a day when I'm able to make this trip without them and oh the difference.