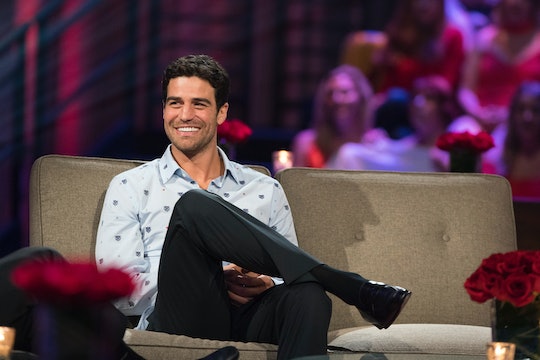 It's a rare thing for a Bachelorette contestant to be memorable and loved by all after being eliminated on the first night. Contestant Joe Amabile did just that, even gaining the nickname of "Grocery Store Joe" because of his profession as a grocery store owner. But when Grocery Store Joe got got in the hot seat on "Men Tell All", the former Bachelorette star was as charming as ever.

I think most fans of Becca Kufrin's season of The Bachelorette can agree that Joe was taken from us way too soon. Luckily, he's going to be part of the cast on Bachelor in Paradise Season 5, but it wouldn't have been the same without Joe on "Men Tell All". This was the first time most fans have seen him on camera since Becca sent him home on night one and it's safe to say that Grocery Store Joe is a man of few words. But his sentence fragments in response to the experience of being a Bachelorette fan favorite this season just made him all the more lovable.

"Before the show aired, I was freaking out," Joe admitted of his short-lived time on the show airing in the first episode of the season. "But it went well." He also said that having fans approach him and root for him has been a pleasant surprise. But I can think of no better deserving guy to find love in Bachelor Nation, especially after seeing his charm and genuine personality on "Men Tell All".

Somehow, Joe's interview on "Men Tell All" wasn't terribly exciting or revealing, but it proved that we were all right for falling for him. Even if Becca didn't. For all of the duds that Becca kept around, it made the loss of Joe that much harder to handle as the season went on, if only because he always seemed like a charming and sweet contestant on night one. So obviously "Men Tell All" couldn't not include him, just like Bachelor in Paradise was an obvious next chapter for his Bachelor story.

I can't remember how much screen time Joe actually got on the season premiere of The Bachelorette since he was axed by the end. So it's entirely possible that seeing him on "Men Tell All" was the first chance most viewers got to start to get to know the guy. He didn't say much, but he seemed happy to be there and for a guy who was on literally one episode of The Bachelorette, he's easily one of the more recognizable faces from this season.

If Joe hadn't been asked to go on Bachelor in Paradise, I would have expected him to be a potential candidate for The Bachelor Season 23, given his popularity which has only been on the rise. There have even been fans petitioning for the Bachelorette cast-off to be chosen for the role of the next Bachelor. And, as Joe told Ashley Iaconetti at the taping of "Men Tell All", he's open to pretty much anything. Regardless of whether or not he found love on Bachelor in Paradise, Joe said that he was simply going with the flow to find love and have a good time. Becca really did miss the mark when she sent him home too soon.

I'm not really sure how or why Joe applied to be on The Bachelorette since he seems way too good and pure for Bachelor Nation, but he's remained a fan favorite all season long. Naturally, most fans were excited to see him pop back up on "Men Tell All", even if he didn't have much to say other than a few short and sweet answers. It's not the most orthodox thing to root for a contestant to be the Bachelor when he was only on one episode of The Bachelorette, but stranger things have happened. Like a guy who was on one episode becoming one of the season's most popular contestants by far.