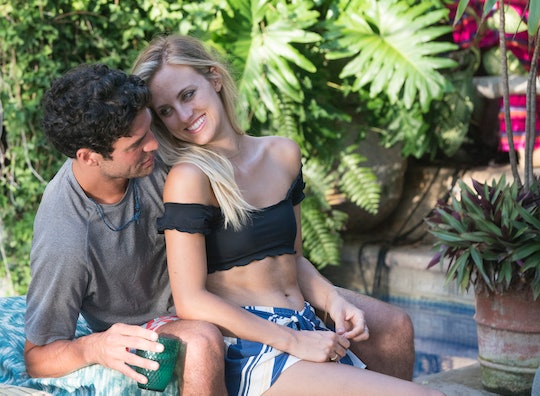 In a shocking twist (truly this time!) for Bachelor in Paradise, fans saw one of this season's strongest couples fall apart right before the season finale. Grocery Store Joe left Bachelor in Paradise after a fight with Kendall and the internet didn't take it well at all. For the couple who met and kissed on day one in Paradise, it was a devastating blow.

"I came here scared of commitment and I ended up with the girl who's terrified of commitment," Joe joked in a confessional interview — right before initiating a conversation with Kendall to gauge how she felt about a potential engagement at the end of the season.

"I like you. I like your soul," Joe began as they cuddled up on a day bed together. He admitted that he was feeling scared about not seeing each other after the show, but suggested that they might get engaged, and asked Kendall what she thought of the prospect. She laughed it off and accused him of messing with her, but Joe pointed out that he was often being serious while she was the one who'd deflect. She asked if she could sleep on the idea and they regrouped the next night to talk more. Joe said he'd been falling in love but was concerned by her response the night before.

Kendall confided that she panicked because she was worried that they were only talking about engagement for the sake of the finale — not because they truly wanted to. She admitted that she loved him, but she didn't know "what kind of love" it was or if that meant she was "in love." (Remember that Kendall's longest relationship before Arie's season of The Bachelor was ten months, so she's not exactly the most experienced.)

She tried pulling the age-old "you never tell me how you feel about me" deflection, but Joe was ready to shut that down. "I've been falling in love with you since day two," he replied. "I haven't been able to express it because all you've said is, 'All my boyfriends try to suffocate me and I want to keep things open.' And of course I say I want to keep things open [too] because that's what you wanted to hear."

Joe pointed out how many times Kendall had searched for (and found) excuses to question their relationship, from going on a date with Leo to kissing John, while he'd remained loyal and committed (and trusted her to explore all the options she wanted to!). He also called her out on including him in "we" statements questioning the relationship, pointing out that they didn't feel that way — she did.

Kendall blamed the split on the fact that Joe hadn't brought up his true feelings earlier, but it also didn't seem like she really made space for him to share his feelings. Joe made the decision to leave pretty quickly once he realized what was going on, and on his way out of Paradise, he came to the heartbreaking conclusion that he and Kendall were actually just friends when he thought they were more. Ultimately, it seemed like the best decision he could make for himself — but that does mean that there was no #JusticeForJoe to be found in Paradise.