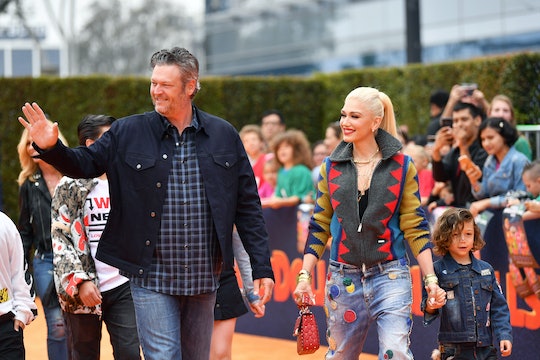 Building a mixed family is not ever an easy task, and when it comes to introducing kids to a new partner or relationship, it doesn't always come together seamlessly. Though it's impossible to say what's really happening behind the scenes, Gwen Stefani and Blake Shelton hit the red carpet with her sons for the first time, and it's a big step for them as a couple.

It should go without saying that red carpets are a really special thing, even if you're a celebrity who probably has to walk them bi-weekly. Still, the person you bring with you on the carpet is undoubtedly significant, and this position is typically reserved solely for spouses, boyfriends, girlfriends, parents and kids. The truth is that you very rarely see a celebrity bringing someone on the carpet with them if they aren't really serious, and then to add their children from a previous relationship as well? It definitely means something.

Gearing up for the premiere of Ugly Dolls, Country Living reported that Stefani and Shelton were seen posing together with Stefani's three children, Kingston, 12, and Zuma, 10, and Zuma, 5. They smiled for the camera as a unit, which certainly seems to suggest that their relationship is at the next level.

For his part, Shelton is aware that it was a special evening. In an interview with Extra, he opened up about the fact that given their schedules, he and Stefani don't often get nights out like these, and certainly not with all the kids in tow. He went onto say that it's a pretty rare occurrence, but that he's happy they're all together.

"It’s a rare thing for Gwen and I to even get out at all. We don’t really get a chance to do anything. One of the two of us are working or the kids are in school — it just never works out for us to all go out. We get to do it about four or five times a year — this is one of them," Shelton said. He went onto say that her kids liked the movie, and that he earned some points with them for having a role in it.

"It’s cool that it's this project — the kids are super excited about this movie. I’m excited for them, because it’s such a great message," he said. "My cool points went up with this one."

Though a combined family outing is certainly a big milestone, it's been a long time coming for the couple. Billboard reported that the pair first met in 2014, but didn't officially start their romantic relationship until the fall of 2015, just a few months after each of them separated from their respective former partners.

Previously, Stefani opened up about their budding relationship to The New York Times, sharing that part of the magic was how similarly their lives were unfolding at the time they were getting to know each other.

The couple has been together for four years now, and it seems that things are going as swimmingly as ever. If they weren't an inspiration before, they absolutely are now.