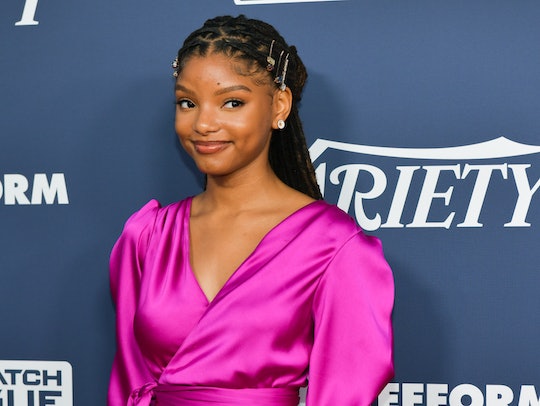 Imagine for a minute that you are a young girl. That you're a singer and an actress. That you've been offered the role of a lifetime, the opportunity to play Ariel from The Little Mermaid in a live-action version of the Disney classic. And you are so excited that you're bursting — until people say you shouldn't be allowed to play Ariel. That your skin is the wrong color (although some of these people won't specifically say it's your skin, of course). That you are not their Ariel. What do you do? Well, Halle Bailey has responded to the #NotMyAriel backlash with such maturity and grace that any one of her critics should walk away feeling ashamed. Assuming they weren't ashamed already.

Back in July, Disney announced that the R&B singer, who most people will recognize as half of the sister duo Chloe x Halle, had been chosen to join the cast of the live-action Little Mermaid remake. She would be joining fellow cast members Jacob Tremblay and Awkwafina to play Ariel, the mermaid princess beloved by children everywhere who gives up her voice to meet the man of her dreams and become a human on dry land, according to Variety.

At the time Bailey, shared a reimagined picture of the original cartoon version of Ariel with darker skin and hair on Instagram with the caption, "Dreams come true."

Unfortunately, not everyone was so excited to see this young woman's dream come true. Not long after the announcement came, there was some pretty swift and pretty horrible backlash. A new hashtag went viral, #NotMyAriel, where critics said they wanted someone who looked like the cartoon Ariel because it was more realistic. To be clear, Ariel was a cartoon half woman/half fish with red hair and a clam shell bra, so I'm not sure who these people were hoping to see.

After more than a month of maintaining her stoic silence in the face of all this unwarranted criticism and racist backlash, Bailey has finally spoken out. In a recent interview with Variety, the singer was asked about the backlash and responded by saying she tries not to pay attention to the negativity:

I feel like I'm dreaming. And I'm just grateful. I don't pay attention to the negativity; I just feel like this role is something bigger than me. And it's going to be beautiful. I'm just so excited to be a part of it.

While Bailey might not be interested in giving all the negativity any credence, she has already had many very vocal supporters in her upcoming role as Ariel. For example, Disney's Freeform responded to critics who tried to use the argument that Ariel was Danish (and therefore white) by noting that Danish people can actually be black, as NBC News reported. And the voice of the original animated Ariel, Jodi Benson, noted that it's the "spirit of the character" that really matters when asked about the controversy in July, as reported by BuzzFeed News.

Hopefully all of these responses put an end to the controversy that does not need to be a controversy at all. And then we can all get down to the business of getting excited for the new Little Mermaid to come out, OK?

More Like This
It’s Britney(‘s Birthday), Bitch!
Brandy Will Play Cinderella Again In The Disney+ Movie The Pocketwatch
Idina Menzel Talks About Being “Exhausted Emotionally & Physically” During IVF Journey
Here's How The Cast Of 'Wednesday' On Netflix Compares To The '90s Movies