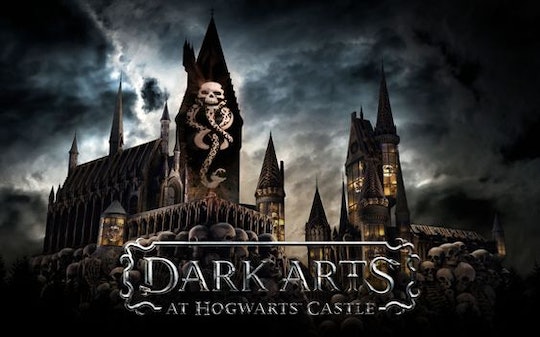 In addition to watching Hocus Pocus — obviously — another Halloween tradition I have in my home is to re-watch all of the Harry Potter movies in order. What better way to celebrate Halloween than watching movies about witches, wizards, magic, and the battle between good and evil? Halloween at the Wizarding World of Harry Potter, that’s what. Experiencing the magic, lore, and spook live and in person, would be the ultimate Halloween celebration. Even better than marathon-watching the movies, if that's possible.

If you're visiting the Magical World of Harry Potter between Sept. 14 and Nov. 15, there’s a new projection show for Halloween right now called the Dark Arts on Hogwarts Castle, Tim Elrod, travel agent and vice president of Travelmation LLC, tells Romper. The Hogwarts castle will illuminate with images of the darker side of the wizarding world on select nights. “You’ll be asked to summon your inner strength and bravely face the all-consuming Dark Arts and even the visage of the powerful Dark wizard Lord Voldemort,” according to the Universal Orlando blog.

First of all, it should be “He-Who-Must-Not-Be-Named,” but that’s OK. But more importantly, how scary would it be to see He-Who-Must-Not-Be-Named in the flesh and the dark mark in person? But it gets scarier: “Dementors, Death Eaters and other unspeakable creatures — such as Aragog, Mountain Trolls, Thestrals, and more — will cloak the castle with sinister images from the darker side of magic, until the Patronus spell… is cast,” the website noted. Take all my galleons now.

If the Wizarding World of Harry Potter isn’t on your Marauder's Map for your vacation, Universal Studio’s version of Disney World’s Mickey’s-Not-So-Scary Halloween Party is Halloween Horror Nights. Elrod says this event is a little bit scarier than MNSSHP, but still fun. If you’re into peeing your pants in fear, that is. The Halloween Horror Nights feature ten different haunted houses featuring different themes, including Stranger Things, Jordan Peele’s Us, Universal Monsters, Killer Klowns from Outer Space, Rob Zombie’s House of 1,000 Corpses, Ghostbusters and more. That sounds pretty intense if you ask me, but there will also be a new Halloween Marathon of Mayhem Lagoon Show according to the Universal Orlando blog. Show times each event night are 10 p.m., 11p.m. and 12 a.m., and movies will include “iconic scenes from Netflix’s Stranger Things, Ghostbusters, Universal Monsters and Killer Klowns from Outer Space,” the blog says.

So no matter which event you go to, it looks like Universal Studios is the place to be to celebrate Halloween, whether it’s at the Wizarding World of Harry Potter for the Dark Arts Projection Show, or Universal Studios for the award-winning Halloween Horror Nights. (Not that trick-or-treating isn't cool. It's just not "hanging out at Hogwarts" cool.)