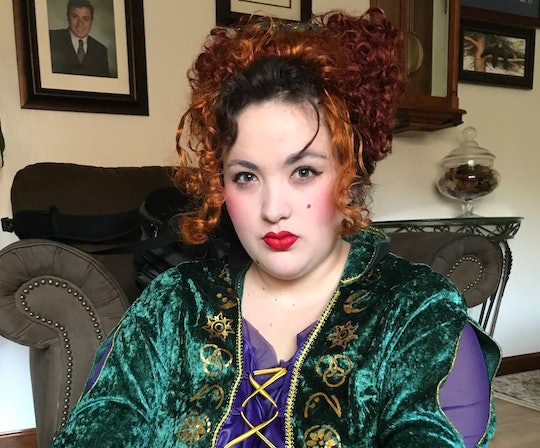 Halloween Has Taught Me, A Plus-Size Woman, A Pretty Valuable Lesson

For much of my life, I felt as though I was always wearing a costume. Ever since my figure began expanding as a pre-teen, I had heard about the so-called "thin girl within:" a version of myself who wore a size 8 instead of an 18. A version of myself who people would like, and love, and treat with empathy and respect. My fatness, I was told in one way or another, was my costume: the thing keeping the "real" me hidden away. As a plus-size woman on Halloween, however, everything seemed to shift.

I cannot remember a time when I didn't love October 31. Even as a teenager, when my peers became "too old" or "too cool" to participate in a little make-believe, I continued to dress up. I've covered myself in purple body paint from head-to-toe in order to portray Ursula. I dyed my hair from dark brown to blonde to better emulate Alice in Wonderland. I have been a mermaid, a Sanderson sister, all manner of historical personas, and a plus size Jesse Pinkman. I've dressed up when I've been a kid, an adolescent, and a grown-ass woman — and I have no intention of stopping anytime soon, particularly now that I have two children of my own who will hopefully dress up with me.

It is an occasion fundamentally rooted in escaping reality and, with that, reality's social constructs.

Halloween has always been special to me. Not just because I love the aesthetic drama of it all, although that's certainly part of the fun — but because on Halloween, the people around me have always managed to look beyond my body. I have always managed to look beyond my body. The irony of feeling seen when physically dressed up as someone, or something, else is not lost on me. Still, there was something to the act of putting on an actual costume that got me closer to feeling like myself. And somewhere in all that, there is a lesson I want to pass down to my kids.

I don't deny that some of what I have experienced on Halloween is likely a reflection of sh*tty cultural values, and that this is a major problem. The idea that the same people who might befriend a fat person on Halloween because they like their costume could be the same people who shame that fat person every other day of the year saddens me deeply. Still, the shaming can be incredibly difficult to deal with day-to-day.

From my experience, most people never seem to question why we're taught to dehumanize and mistreat fat individuals. They never interrogate their own prejudices or the ridicule they freely bestow onto those who allegedly take up too much space.

On Halloween, however, a lot of this B.S. has always seemed to fade. There's an innocence to the holiday. It is an occasion fundamentally rooted in escaping reality and, with that, reality's social constructs. It's rooted in play. In presenting ourselves however we wish to in the moment. In showcasing an aspect of our identities or interests that we might not get to showcase on any regular old day.

There has always been a practical element to my love of Halloween, too, which is that finding a costume in my size (anywhere from a U.S. 20 to a 24) has always been surprisingly straightforward. Or at least, easier than finding jeans, dresses, or coats that might be handy the other 364 days of the year. For someone who's always loved clothing, but never felt loved back by the clothing industry, this has been a big deal. Halloween allowed me to play with fashion in times when doing so wasn't really possible otherwise. It allowed me (a shy, introverted person by nature) to assume a more confident role: The role of someone emboldened by feeling like their outside matches their inside.

It's possible that the confidence I have always felt on Halloween is part of the reason I've been better received by those around me. Or maybe, I just never gave as much of a crap about what others thought of me on Halloween as I did the rest of the year. After all, I felt good in my costumes. I felt more like myself than I ever did in the boot-cut jeans, tunic tops, and A-line dresses of plus size fashion history. I felt, somehow, freer.

Whatever the reason, Halloween presented me with an ideology of body and fat positivity long before I'd ever heard the terms. It's the idea that you will become infinitely happier when you are in control of your own image. Not when you unleash your supposed "thin person within." Not when you buy all the latest trends purely because that's what you think you "should" do. Not when you follow some arbitrary "what not to wear" rules for your body type.

I'm not sure that the people around me genuinely were friendlier on Halloween than they were at all other times. Chances are that what was different was me.

It's when you dress, and live, for yourself. When you disregard what everyone else is saying you should do to, or with, your body, and go on your own instinct and interests. When you allow yourself to be kind, or at least neutral, to the person you see in the mirror, rather than bitterly picking the reflection apart. Assuming this type of control isn't necessarily about finding elusive, fluffy self-love, but rather about learning to present in the ways you find fulfilling, whether those around you appreciate it or not.

Halloween gave me a stage on which to do all this before I actively taught myself how to live this way every day. Looking back, I'm not sure that the people around me genuinely were friendlier on Halloween than they were at all other times. Chances are that what was different was me. I was experiencing what day-to-day life might be like if I just let myself live. If I didn't care about how "flattering" or "unflattering" an outfit was. If I didn't care that people thought something about me looked "ridiculous" or "ugly." If I didn't follow the rules.

This is where the lesson for my kids comes in, I guess. Halloween does provide the perfect stage on which to present yourself exactly as you wish. It teaches you how to experiment with fashion, with makeup, and with make-believe. In a lot of ways, it's a kinder reality than everyday life. But living as you do on October 31 doesn't have to be impossible the rest of the time. There may be less candy on other days — less witches and ghouls roaming the streets. There can always be autonomy, though. We can open ourselves up to the satisfaction of controlling our own images all 365 days. I certainly hope my daughters do.