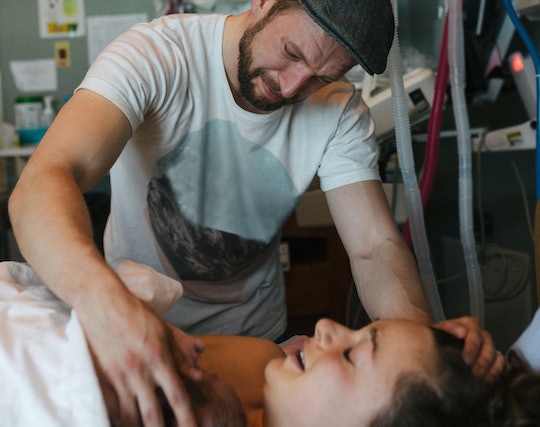 There's No Such Thing As A Pain-Free Birth... But There Are Things That Can Help

Olympian volleyballer Gabby Reece planned to have an unmedicated birth, but the Fates had a different idea. "I think the gods laughed like, 'We are going to slow you down,'" she said of pushing for a few hours before being told she needed a c-section. Reece was speaking at an event hosted last year by Moms Meet and Plan Against Pain on alternatives to opioid prescriptions for managing pain after birth. Her story is instructive: there is no such thing as a pain-free birth or recovery, and the issue of how new moms deal with postpartum pain is of growing concern, particularly as the national opioid crisis rages on.

According to the American College of Obstetricians and Gynecologists (ACOG), the most common problems reported by new mothers in the early postpartum period are fatigue and pain. (I'll give you all a minute to register this truly shocking information. Who possibly could have guessed that the vaginal expulsion or surgical removal of a 5 to 10 pound human who doesn't sleep for more than 2 hours at a time would result in pain and fatigue for the mom?)

Take it from someone who has delivered "both ways": No matter how you bring a baby into the world, it doesn't tickle, and the recovery is no walk in the park. While moms who deliver vaginally are often given over-the-counter medications (and padsicles!) for postpartum pain, 51 percent of women who delivered via c-section (which accounts for approximately a third of all births in the U.S.) were prescribed an opioid in a survey by Moms Meet. Yet according a survey from Pacira Pharmaceuticals, nine out of 10 women have concerns about taking opioids before and after birth, ranging from the effect such drugs might have on their ability to breastfeed and otherwise care for their baby to the possibility of developing a dependence or addiction.

Only about 11 percent of pregnant women ask their doctors about opioid alternatives to pain management.

This fear of addiction is hardly unreasonable: news of the opioid crisis in America is everywhere, and it should be. Every day, 130 people will die of an overdose, according to the CDC. That's more than five people per hour and tens of thousands per year, and many of them will have been exposed to opioids for the first time following a medical procedure. This fear may, in part, motivate the majority of women (up to 95 percent in a 2017 study published in Obstetrics & Gynecology) to forgo using their entire prescription. And while, at first blush, that may seem like a good thing ("Way to not take pills you don't need, mama! Woot!"), it highlights several potential issues: over-prescription of opioids by doctors (if the moms didn't feel they needed the pills); unsatisfactory or inadequate pain treatment (if the mom did need some sort of pain relief but was too scared to take what she was given); and the fact that ACOG cites "untreated pain" as a risk factor for greater opioid use (so those pills sitting in the bathroom cabinet while mom suffers may possibly be abused at a later date).

While the chances of an "opioid-naive" new mom becoming dependent after a c-section are slim — about one in 300 — co-morbidity factors such as previous non-opioid drug abuse, antidepressant use, and certain pain conditions increase one's odds of continuing to use opioids beyond the immediate postpartum period. In spite of all of this, the Pacira survey also found that, despite the prevalence of c-sections and an existing fear of opioid use, only about 11 percent of pregnant women ask their doctors about opioid alternatives to pain management... which is a shame, because there are options.

Dr. Alyssa Dweck, OB-GYN and co-author of The Complete A to Z for Your V, believes its important to set "realistic expectations for women about pain" for any birth. “For c-section patients specifically, I’ve seen a real shift in our approach to managing post-surgical pain from a time when opioids were considered standard of care to now working to minimize patient exposure with effective non-opioid." For example, warm showers and perineal exercises were found to help with postpartum pain in a study published in the International Journal of Nursing Practice.

ACOG does recognize that opioids can be a viable pain management option after a c-section, but advocates a "stepwise analgesic ladder" approach. In other words, don't start with opioids. See if something milder (acetaminophen or nonsteroidal antinflammatory drugs, for example) will do the trick. They might!

Pain management plans should be approached the same way birth plans are — with research, clear preferences, and flexibility for when things don't go exactly as planned.

If it doesn't work then move on to a mild opioid. ACOG also suggests trying a multimodal approach, alternating between medications in order provide a longer-lasting analgesic effect without over-using any one medication. ACOG also recommends remaining on opioids for as short a period as possible but ensuring that your pain is still well-managed. Because while 40 percent of moms worry that using opioids will mean they're not "fully present" after birth, per the Moms Meet survey, the fact remains that untreated pain can interfere with a woman's ability to care for herself and her newborn as well.

At the same time, a fear of pain, or belief that there should be no pain whatsoever, should be addressed. Simply telling women that some pain is to be expected, and will dissipate, can equip them to handle it, Dweck and Reece say.

"The first 3-6 days, it's uncomfortable, but the exponential improvement in how you feel after that, it is so incredible," said Reece.

There are lots of reasons people might not consider postpartum pain management as fully as they should: anxiety about birth and the associated pain, excitement about baby overshadowing practical concerns, or, frankly, denial that pain will be an issue at all. But pain management plans should be approached the same way birth plans are — with research, clear preferences, and flexibility for when things don't go exactly as planned.

Reece, who has two daughters with big-wave surfer Laird Hamilton, is not afraid of the after-effects of childbirth. "Pain is also a great friend and it's nice to have a little because it's letting you know what's going on with your body.

"We can't not have any pain ever."