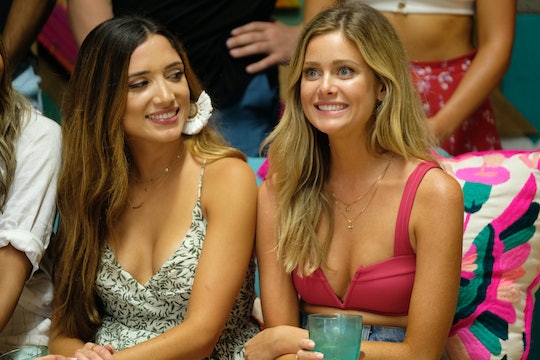 Hannah G. Isn't Getting Rid Of Blake That Easily On 'Bachelor In Paradise'

Blake's Bachelor in Paradise experience just did a total 180. He went from falling for Hannah G. and having a real chance with her to being the only one on the show without any prospects. It puts his future on the show in jeopardy, but Kristina saved him for at least another week. So although Hannah G. chose Dylan on Bachelor in Paradise, Blake isn't going anywhere yet.

Dylan, Hannah G., and Blake had the first major love triangle of the season. As she went back and forth between the men to decide who she wanted to be with, it became a game of ping pong for the other cast members and viewers. It was unclear who Hannah G. wanted to be with and every time she got closer to Blake, it broke my heart a little to see how crushed Dylan was. At the end of the day, it's all about what makes Hannah G. happy. That doesn't mean the love triangle wasn't starting to get exhausting, though.

The triangle finally came to an end when Hannah G. chose Dylan, much to the relief of the rest of the Bachelor in Paradise Season 6 cast. It would have left Blake out in the lurch, but Kristina gave him her rose to let him stick around. So as Dylan and Hannah G. fall head over heels for each other, Blake will be there to mope in the shadows.

Even though Hannah G. essentially dated both Blake and Dylan before she made her decision, Dylan was often at the mercy of watching Hannah G. and Blake get closer on the beach, on the day beds, and in the pool. He basically couldn't go anywhere at the resort without running into his love interest and her *other* potential suitor.

Now, even though Hannah G. and Dylan won't get the privacy they need as a newly minted couple on Bachelor in Paradise, Blake will have to be the one to watch them fall in love. Blake's presence on the show right now isn't good for him or for Dylan and Hannah G.'s new relationship, but it certainly adds to the season's drama.

If there is any concern about Hannah G. changing her mind with Blake still hanging around Paradise, their date just cemented their status as top couple. Dylan told Hannah G. he is totally in this relationship for her on Bachelor in Paradise and beyond and she said she is too. It was the best outcome viewers who had rooted for Dylan could hope for.

"Getting to know Dylan has exceeded all of my expectations," Hannah G. said in Monday's episode. "It feels right with Dylan. I don't want to hold back."

At this point, I would be legitimately surprised if Hannah G. and Dylan aren't one of the engaged couples at the end of the season.

Someone is bound to get hurt when there is a love triangle involved. Bachelor in Paradise doesn't make it any easier with the system of bringing new contestants into the fold every week to shake things up and sometimes break couples up.

While Hannah G. grappled with her feelings for both men, Blake and Dylan were hurt at different times before she finally made her decision. And although Blake isn't feeling too hot right now, fans are relieved to see the end of the love triangle. With Blake still puttering around Paradise, however, things will continue to be awkward whenever he sees Hannah G. and Dylan actively falling in love with each other.

Right now, the best case scenario is for Blake to move on, but he still seems hung up on Hannah G. Hopefully she and Dylan can move on with their new relationship and put the love triangle behind them for good.