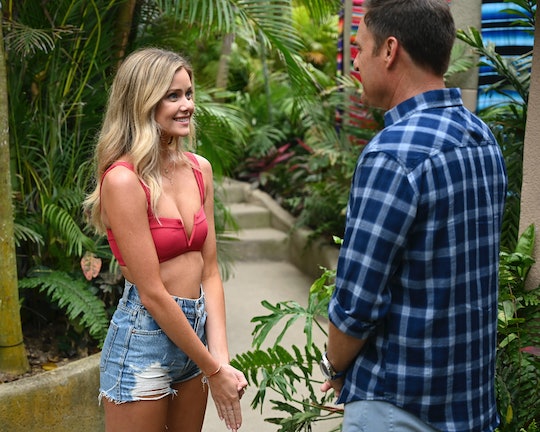 Hannah G. On 'Bachelor In Paradise' Has A Big Decision To Make

Hannah G. has a big decision to make on Bachelor in Paradise. She went into the season with the hope of finding someone to connect with, not knowing that by week two, she would already be in a love triangle with Blake and Dylan. Both men have pledged their dedication to being with her and no one else, but she seems to be having a hard time choosing between them. Right now, it’s not clear who Hannah G. chooses on Bachelor in Paradise, but she is going to have to give her first rose to someone Tuesday night.

It’s easy to want to root for Hannah G. and Dylan since Blake has officially sullied his Bachelor Nation name by pulling a Dean and being with multiple women too close together in a time frame. Blake and Hannah G. do have a little bit of history, however, and if something already sparked between them before Bachelor in Paradise, it’s only natural for them to pick things up where they left off.

On Monday’s episode, it was revealed that Blake and Hannah G. met in her town before the season started filming. It’s not clear what happened between them or how serious it was, but that could put Blake a few steps ahead of Dylan. On the other hand, Dylan came to Paradise with nothing to hide, so he could be the clean slate Hannah G. needs when it’s all said and done.

In the Bachelor in Paradise Season 6 trailer, Hannah G. asks someone to join her for an overnight date. Although it's hard to say for sure which dark-haired male contestant it is, it looks like Dylan. And if Hannah G. make it as far as overnight dates this season, then I think there's a good chance she chooses him over Blake in the end.

To Blake’s credit, he did proclaim his monogamy for Hannah G. in Monday’s episode. So if he is trying to put his past behind him and keep it there, he and Hannah G. could still have a future, if only for a little while longer. Despite Hannah G.’s own interest in Blake, I think she and Dylan have more of a lasting connection that could take them far.

Hannah G. also says in the Season 6 trailer that she and this mystery man have come so far. Nothing says going through it with your partner like dealing with a week two love triangle and pushing through it to realize you belong together. Maybe I’m just projecting my hopefulness at two people finding love without the added drama of past pre-Bachelor in Paradise relationships. I just see Hannah G. and Dylan working out a lot more smoothly than Hannah G. and Blake.

For now, all we can do is watch with bated breath as Hannah G. navigates her way through this love triangle and tries to figure out which guy is best suited for her. At the end of the day, all that matters is that she is happy and satisfied with her own decision, but hopefully she can make it soon so this love triangle business is squashed.