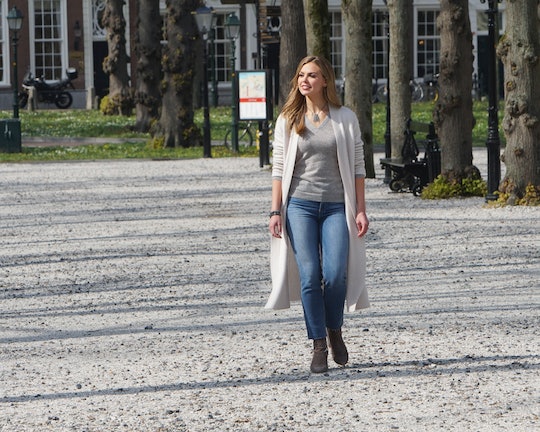 Hannah & Luke's Fight On 'The Bachelorette' Continued On Twitter

After a failed overnight date on The Bachelorette, Luke is gone. On Monday’s episode during what was supposed to be Hannah’s final overnight date of the week, she got into it with him and finally saw all of the red flags she had been missing this season. After he shamed her for having sex with other men on her other fantasy suite dates, she sent him home and now, Hannah and Luke’s Twitter battle has Bachelorette fans in a tizzy.

On the show, Luke told Hannah that he didn't think it would be appropriate for her to get physical with any of the other men on the overnight dates and he was shocked when she told him that she had sex in a windmill. He was critical of her actions and her views on sex before marriage. But Hannah didn't take any of it lying down and told him that she owed him nothing and that no future husband of hers would have spoken to her like that. Now, they have taken their fight to the internet.

It’s typical of the stars and contestants of The Bachelor and The Bachelorette to tweet about each new episode as it airs and give commentary on the high and low points of each weekly episode. Hannah did just that when it came to her date with Luke and if we’re being honest, it’s what the people wanted. Luke, however, came at her with a clap back and continued to lecture her about how wrong he still thinks she was.

It all started with Luke’s tweet at Hannah about her laughing at what he believes is her sin. That is likely in reference to Hannah owning her decisions on The Bachelorette and being happy with herself on camera that she stood up to Luke and sent him packing when she did. Just like on the episode, Hannah didn't just take Luke’s judgments of her without coming for him too.

Hannah responded with Bible knowledge of her own and pointed out that, according to the Bible, Jesus loved sinners and "rebuked 'saints' that judged." She then asked Luke where he falls in those categories. If Luke thought that he could come at Hannah with Biblical references to make her feel guilty for making the decisions that feel right to her, he had another thing coming. But much like the way she couldn’t get rid of him on Monday’s episode, he had more to say to Hannah during their Twitter fight.

Luke told Hannah on Twitter that "Sin is the very thing that put Jesus on the cross and that’s not a laughing matter." From where I’m sitting, though, Hannah never laughed about anything other than the fact that she was able to get rid of a toxic man in her life on The Bachelorette and free up her time to focus on the men who weren't there to judge her actions or beliefs.

Hannah even retaliated on Twitter to tell Luke that she never found her sin to be funny, but she also didn’t welcome being lectured by someone like Luke. He was the cause of the majority of the drama this season, aggressively got in other men’s faces, and continuously played himself off to be more of a victim than anything. Now, after the fact, Luke continues to justify his actions by tearing down Hannah’s own beliefs and that’s not cool.

Then, Hannah threw more Bible knowledge of her own at Luke and tweeted that "God dealt with shame when he dealt with sin." So in her eyes, she wasn't about to entertain judgments from someone in the name of God, who Hannah herself already has a religious relationship with.

Instead of addressing that tweet, Luke sent one last attack on Hannah to shame her for her tweets about having sex in a windmill and told her that she knows how to get a hold of him if she wants to talk. Correct me if I’m wrong, but I’m fairly certain Hannah would have preferred to end all contact with him the minute she dumped him on their overnight date.

Luke and Hannah’s Twitter battle was a way for Hannah to continue to defend herself against a Bachelorette contestant who probably shouldn’t have gotten as far as he did anyway. Hopefully with him out of the picture, she can finally move on.