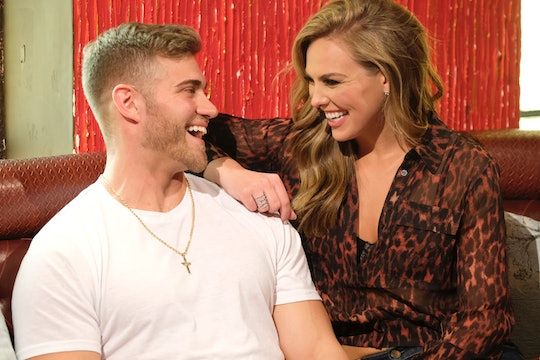 Hannah Finally Saw Through Luke On 'The Bachelorette'

I can't count how many times I have wondered this season how Luke made it this far with Hannah. He got in fights, incited drama with almost all of the other men, and continuously threw up red flags that Hannah tried to look past. Finally, during the dinner portion of their overnight date on Monday night, Hannah told him off and fans are screaming over Hannah's take down of Luke on The Bachelorette.

Because of Luke's open jealousy over the season, his insecurities about Hannah and her other final three men probably shouldn't have come as a surprise to anyone. I'll give him props for being honest with Hannah and sticking to his own convictions during their date, but that's all he's going to get from me. He straight up told Hannah that he would leave if he found out that she had sex with any of the other men on her other fantasy suite dates.

Did he not know how The Bachelorette works before he auditioned to be on the show? Hannah has been dating more men than just Luke for the duration of the season. As she told him herself, she doesn't owe him anything. Side note: Hannah is now my hero.

The point of overnight dates is to give the Bachelorette and her men the opportunity to have alone time, away from cameras and "Can I steal you for a sec?" requests of the other guys. Whether or not Hannah had sex on any of these dates isn't important and it certainly isn't Luke's business.

When Hannah told him as much and stood up to him and his judgments on their own date, it was the moment fans had been waiting for all season. She read him like a book and it was everything.

Hannah asked Luke why he has the right to ask her about the men she may or may not have slept with on her other overnight dates. She said that at this point, he doesn't have the right to judge her and pointed out his own shortcomings.

She then pointed out that right now she isn't "strapped to a man" and that she can do as she pleases romantically and physically with other men. Honestly, I don't think Luke deserved even that, but it was probably necessary for her to finally tell him off.

During the daytime portion of their date, Hannah and Luke seemed like they were ready to have a memorable overnight date with no drama. But where there is a Luke, there is a way, and eventually he brought the drama in a big way when he openly judged Hannah and then tried to tell her that she owed him the chance to defend himself after making her feel so terrible.

Fans were not here for Luke's judgmental comments or criticisms of Hannah, but they were here for Hannah taking Luke down on The Bachelorette. While before she saw past all of the drama he caused this season, the overnight date was the final straw to show Hannah that she doesn't see herself with him for the long haul.

Throughout the season, Hannah repeatedly said that she saw something in Luke that the other men didn't see themselves. She even said during the daytime portion of their overnight date that she sees a different side of him when they are away from everyone else. When it came down to it, though, Hannah saw another side of him that he couldn't take back.

Luke shamed her for getting close to some of the other contestants earlier in the season. When he tried to make her feel ashamed about being physical on her overnight dates, it was the final straw for Hannah. She stood her ground and sent Luke packing before he got the chance to not have sex with her in their fantasy suite.

And when Hannah verbally destroyed him, Bachelorette fans let out a collective cheer for the Bachelorette we don't deserve.