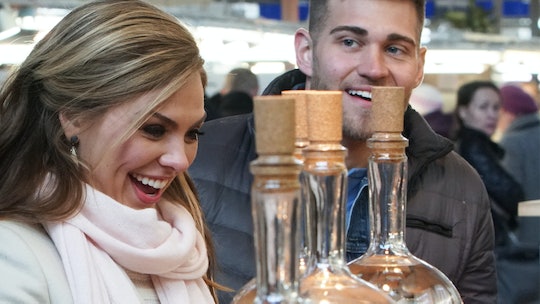 I'm not the first one to say this, but Luke P. needs to leave The Bachelorette. On the Jun. 24 episode of the ABC series, Hannah stripped down with Garrett for a bit of naked bungee jumping, and to no one's surprise, Luke did not stay in his lane. Following the one-on-one date, the Georgia native decided to confront Hannah about his beliefs, but Luke's comments about Hannah on The Bachelorette has Twitter in a rage — and for good reason.

Luke has been flashing red flags throughout the entire season. Despite having an instant connection with Hannah at the start, Luke was almost kicked off the show during last week's episode after their one-on-one together, but he was ultimately given — yet another — second chance. But, this one might be the last straw. After Hannah confirmed that she went naked bungee jumping with Garrett, Luke melts down in disbelief, describing a woman's body as her "temple," not to be seen by anyone but her husband. But hold up — isn't this coming from same the guy who openly admitted to sleeping with a bunch of women prior to the show? Yup. And the hypocrisy was not lost online.

But wait, it gets worse. Luke then compares Hannah's date to cheating. Seriously, has he never seen the show? Fans joked that Luke clearly did not understand that he was signing up for The Bachelorette — a show where his potential girlfriend would be dating multiple different men at once.

Nonetheless, most fans were livid over Luke's possessive comments. One Twitter user compared Luke to Rose's controlling fiance from Titanic. Meanwhile, another fan was infuriated that Luke essentially told Hannah where and when she could be naked and tried to spin it as if he were being "real."

Regardless, everyone is over the Luke drama. And quite frankly, fans are just waiting for him to stop talking.

In an interview with Entertainment Tonight, Bachelorette host, Chris Harrison, revealed that Luke and Hannah's strongest connection could also be their downfall.

"Ironically enough, faith is what brought them together. And his faith and his conservative values might be their biggest sticking point and become the biggest divide between them," Harrison said. "'No matter what you believe, my body, my choice, my life, and if you don't like it, there's the door. Don't let it hit you in the a** on the way out.' That's how she approaches all the men. She's very vulnerable and emotional, but don't you dare cross her and question her decisions, because this is her life and you've got to respect that."

In spite of all the Luke drama, the Jun. 24 episode did confirm one thing — Bachelor Nation can still count on Tyler C, who has yet again proven that he isn't just a snack. He's the whole meal.

Please, Hannah. I'm begging you. Send Luke packing next week. After a series of questionable behavior, it's about time to put the Luke drama to a rest. Twitter knows it. I know it. We all know it. Let's end this.