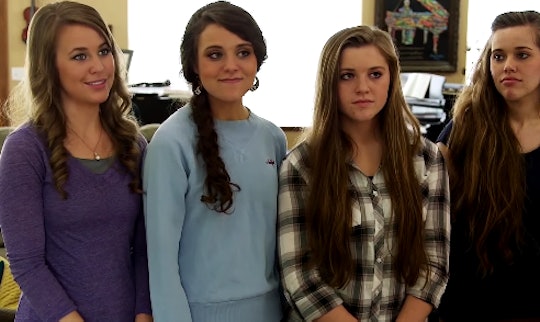 The Duggar Family Is Totally Open To Adopting In The Future

Most people who are at all aware of the Duggar family know that there are a lot of people in it. Jim Bob and Michelle Duggar of Arkansas had 19 children of their own, and now, many of their kids have started their own families. But have any of the Duggars adopted, as they've begun to welcome grandkids into the super-sized Duggar family?

As previously mentioned, the main Duggar family of 19 Kids and Counting and Counting On fame includes 19 children. In addition, in November 2016, Jim Bob and Michelle were named permanent guardians of their great-nephew, Tyler. So it's sort of like they adopted, but not in the traditional sense.

For the most part, however, all of the Duggar kids are their biological children. And many of the older Duggar children have started families of their own — including Jim Bob and Michelle's oldest son, Josh, as well as daughters Jill, Jessa, Jinger, and Joy, and two more sons named Joseph and Josiah. They're all at least married, and many of them are also parents.

So, have any of the married Duggar kids adopted kids? So far, there are 12 Duggar grandchildren in all, according to In Touch Weekly. That total grew by one in July, when Jinger Duggar Vuolo and her husband, Jeremy Vuolo, welcomed daughter Felicity on July 19.

In March 2013, Jim Bob and Michelle were reportedly "open" to adoption, according to E! News. That was after their youngest daughter, Josie, was born in 2009. At the time, Michelle told People:

We are open to the idea of adoption. We are praying about it, and we will see what God has in store. Love for children has been placed on our hearts.

And she went on to add:

We are open to whatever is in store. It doesn’t really matter whether I would have another child or we would adopt, but we want to approach it with an open heart.

But years later, only Tyler has been added to the Duggar brood through legal rather than biological means.

One of the Duggar daughters, Jessa Duggar Seewald, and her husband, Ben Seewald, have talked about adopting in the past. In fact, in February 2017, Jessa told People:

Ben and I still have a deep desire to adopt, and it’s something we continue to look into. We’ve also talked about fostering to adopt.

Back then, they only had their oldest son, Spurgeon, and were expecting their second son, Henry. And that wasn't the only time Jessa spoke publicly about the possibility of adoption; they also talked about it when Spurgeon was a baby. She told Us Weekly in May 2016:

We have many friends who have walked this road, so we have seen firsthand the amazing power of adoption. There are so many kids out there who are longing for the love of a family, and we feel strongly about opening our hearts and our home to welcome them in.

But Jessa and Ben have not adopted a child — at least, not yet. None of the other Duggar children have either, and there is some evidence that they actually can't, according to their religious teachings.

The Duggars reportedly follow the teachings of the Institute in Basic Life Principles (IBLP), according to In Touch Weekly. Jim Bob and Michelle still regularly attend and speak at IBLP events, according to the organization's website. Its founder is Bill Gothard, and according to people who have left the teachings behind, "Gothard's writings and teachings are decidedly against" adoption.

To be fair, there's always a chance that the Duggars don't follow all of Gothard's guidelines. It's also possible that some of the Duggar kids have decided to be a little more lax about what they believe of the religious teachings they were raised with, and what spiritual teachings they want to follow in their own families. They may have decided that adoption is an option for them.

The truth is, we won't know whether any of the Duggars want to adopt unless one of them actually decides to do so and makes the public aware of their decision. For now, none of them have chosen adoption to add to their families, but that doesn't mean a Duggar won't go that route in the future.