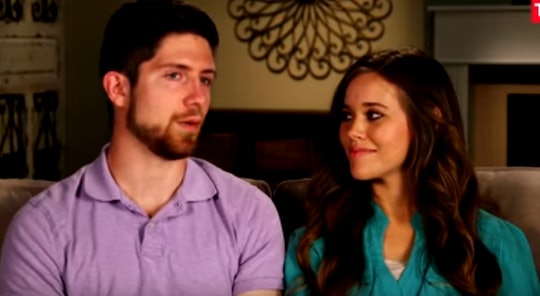 Have Any Of The Duggars Used A Midwife? It's A Common Practice For The Family

The Duggars have really made a meal out of birthing babies. The family fans first met on TLC's 19 Kids & Counting keep bringing more little Duggars into the world, and it doesn't look like it's going to stop any time soon. Joseph and Kendra Duggar are expecting their first child this year, as are Jinger and Jeremy Vuolo. So with all of those babies being born, what sort of birth plan do the Duggars generally subcribe to? Have any of the Duggars used a midwife?

Well, if any future Duggar mom plans to use a midwife, I have good news for them; there could already one in the family. Jill Dillard became a fully certified professional midwife as of September 2015, after apprenticing at A Mommy's Butterfly. At the time, her husband Derick Dillard praised his wife and mother of his two sons for her hard work and diligence on the family's website, according to Us Weekly, writing, "As of Wednesday, Sept. 16, and after the seven-hour comprehensive exam for certified professional midwives, she is now ‘Jill Dillard, CPM. I am so proud of her for her diligence, perseverance, and hard work to see this long road through to its end and reaching her goal of becoming a CPM."

While it's unclear whether or not Jill Dillard is still a certified professional midwife (she is no longer officially listed as a licensed midwife in her home state of Arkansas, and the midwife she trained under had her license revoked in 2016), Jill Dillard was certainly on hand when her little siter, Joy-Anna Forsyth, was going through labor at home in February. Unfortunately, Joy-Anna ended up being rushed to the hospital after 20 hours of labor at home when it was discovered her baby boy, Gideon, was in the breach position.

When Jessa Seewald gave birth to her second baby, Henry Wilberforce, in 2017, Jill was reportedly present for that home birth as well, although whether that was in her capacity as a supportive sister or a midwife, no one was saying. When Jessa gave birth to her first baby, Spurgeon, in 2015, she gave birth at home with the aid of a midwife who was not identified on the TLC series Counting On. Much like sister Joy-Anna, Jessa had to be rushed to the hospital after giving birth for an emergency blood transfusion.

Jill Dillard turned to her own team of midwives when she was giving birth to her son Israel in 2015 when she was still a student, and mom Michelle gave birth to her older children with a midwife present. Eventually Michelle had to be under the care of a doctor, as she admitted during an episode of 19 Kids & Counting, because she had given birth to so many children she was deemed "high risk."

It's important to note that the practice of midwifery is an ancient, well-respected alternative to giving birth under the care of a physician that hundreds of thousands of American women have used safely. In 2014, 332,107 babies were born under the care of a certified professional midwife, which represented 12 percent of all vaginal deliveries in the country.

As Kendra Duggar, Joseph Duggar's wife, prepares to give birth later this year to a baby boy, it's unknown if she is planning to use a midwife. As for Jinger Vuolo, who was herself delivered from mom Michelle with the help of a midwife; it seems likely that she would choose to use a midwife. Whether that midwife is her sister Jill Dillard or someone else in her new hometown of Laredo, Texas, is anyone's guess.