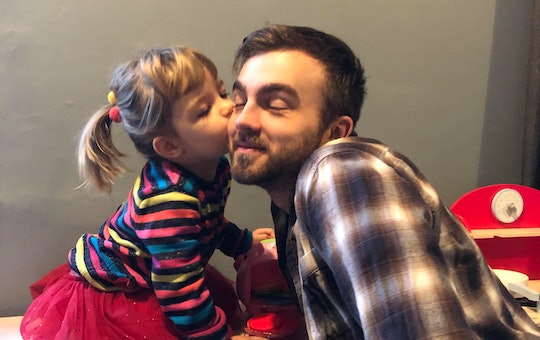 Having A Second Child Made My Partner Closer To Our First

There were times, after the birth of our eldest daughter, when my partner and I would look at one another in what felt like utter despair. Neither of us had a clue as to what we were doing, though our feelings of inadequacy looked a little different. Where he'd worry about not feeling close enough to our child — not knowing how to talk to her, or play with her, or simply be with her for extended periods of time — I grew obsessed with the idea of how my mental health might affect hers, and subsequently spent a lot of time Googling whether my anxiety could be passed down to an infant.

We've both worked on our respective issues in the three years since, but when it comes to my partner's fear about not bonding closely enough to our kid, I actually think it was the arrival of our second daughter that helped their relationship most. Before Elia, our youngest, was born, we suspected that things would soon get much harder. Sleep would be scarcer, we knew, as would alone-time and couple-time. The house would probably be dirtier. Money would be tighter. Our home would be louder.

We weren't wrong, and in terms of day-to-day life and practical activities, things certainly are more difficult now. In terms of our deeply-rooted emotional fears, however, things are actually much simpler. When a second child is introduced into the picture, there just isn't as much time to dwell on the abstract. There isn't as much time to contemplate what show to watch, or what toy to play with, or what book to read, or whether we're somehow f*cking up, because there are two small children demanding attention (often so loudly, that one cannot possibly focus on anything else).

In retrospect, there were probably a lot of things making my partner feel distanced from Luna, our oldest. Although I never doubted his love for her, it was obvious that he had never spent much time with small children. It had also been decades since he himself was a small child, and the memories of what made him happy or sad or fulfilled at that age were long gone. Some memories, from his earliest years, were never preserved to begin with. Not having a foundation through which to guide early parenthood would be tough for anyone. Add to that my partner's tendency to over-think, and he was bound to feel a little lost.

When we considered having another child, however, we were both inundated with the desire to ensure Luna would never feel left behind through the introduction of a new sibling. We knew it would be an enormous adjustment for her (she was only 19 months old when Elia was born), and we wanted to make the transition as smooth as possible. There was no way we could completely stop her from feeling hurt, or betrayed, or neglected, or angry, but we could at least try to amp up the attention we were giving her — especially in Elia's first few months of life, when she'd hardly be able to see or recognize anyone or anything happening around her anyway.

After Elia came (and when I was still recovering from the birth and re-navigating having an infant attached to my body through most of the day), it was my husband who really stepped it up with Luna. I would hear them building block towers in the room next door. I would hear them laughing together at the latest episode of Hey Duggee. I would watch them dance around the dining room while nursing Elia to sleep. I'd see my partner play — really play — going above and beyond to make her giggle. He'd jump like a frog or throw her in the air or sing in a Tom Waits-inspired voice, while Luna's face swooned in adoration.

It might have also helped that she was getting a bit bigger. Between 19 and 24 months of age, she learned so many new words. She began to more clearly express her desires through a combination of language and signals. She grew more interested in actually playing with her toys, as opposed to chucking them around the room. For many of us, it's probably much easier to figure out how to play with an older child who actually plays, rather than a younger one whose idea of play is still limited to repeatedly smashing a doll into a book.

Despite my partner's growing bond with Luna in the time since, Elia is still a total daddy's girl. He never doubted that he'd feel close to her. He never struggled to cuddle up to her on the couch, or play in the non-playing way that tiny babies play, or simply chill in a room as she dozed off in a rotating infant chair. Through having our oldest, all of that became second-nature.

His bond with Luna never impacted his bond with Elia. Second children never know a life without their sibling. Sharing is perhaps more intrinsic to them, so she's never minded it when Papa shows her big sister affection or attention.

Parenting doubts still creep in for him, as they do for most of us. Still, I believe that seeing our first child grow into a loving, playful, funny little person reassures us that we must be doing something right. Seeing Luna run to the door with arms outstretched every time he comes back from work or from running an errand probably reassures him of their bond, too. A bond that was always there, but perhaps just needed a bit of a push to shine more brightly.