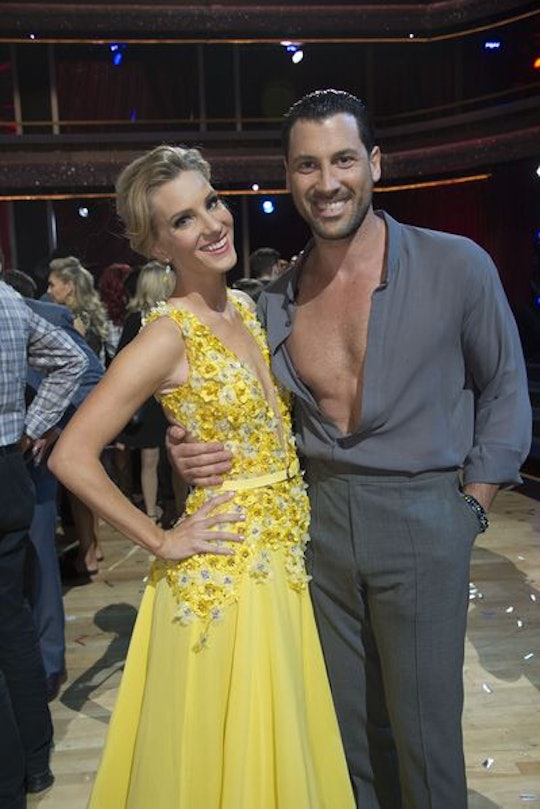 'Dancing With The Stars' Delivered A Surprise Twist

Maks Chmerkovskiy only just returned, but somehow Heather Morris was eliminated on Dancing With the Stars after her very first (and now, only) perfect score of the season. Needless to say, it was a pretty big shock all around. As soon as it was announced that Morris would be going home, boos were heard from the audience and host Tom Bergeron even said that it was the strongest reaction he'd ever heard from the crowd about someone being eliminated on the show.

For Disney Week, Morris didn't earn a perfect score, sure, but she and Bersten's Frozen routine was still creative and well done enough to give her a 34 out of 40, so as Week 6 rolled around, Morris was still riding high on that wave of high scores. No one could have predicted Morris getting eliminated on DWTS and at a time when Chmerkovskiy, her original partner, had just made his return to the show following a calf injury from earlier in the season.

Of course, it didn't help that Morris didn't get much time to say goodbye as the show came to a close, but you could tell how surprised and disappointed she was, even if she put on a brave face. Honestly, I think most viewers and fans were just as surprised.

There has undoubtedly been some pretty fierce competition this season, in the form of contestants like Normani Kordei and Rashad Jennings, but other than those strong dancers, I didn't see much in the way of Morris and that Mirrorball trophy. Earlier in Monday's episode, it was revealed that it was either going to be Morris, Kordei, Nancy Kerrigan, or Simone Biles who went home, and among them it seemed like a given that Morris would be safe.

Obviously that wasn't true though and Morris was eliminated on DWTS on a night that should have given her the most reason to celebrate. Maybe Bersten was the good luck charm she lost when Chmerkovskiy came back or maybe she lost fan support without the latter by her side. Either way, fans are probably still reeling from the shock of it all.

It's always sad when someone is eliminated on DWTS, but it's sad and shocking to see Morris go already. At the very least, I expected her to make it to the final two this season. Her numbers and moves have been consistently strong and while at times the judges have been hard on her, she's been able to shine as an amazing dancer.

Morris being eliminated on DWTS after showing her ability to earn a perfect score and continuing to wow pretty much everyone just makes no sense. And all of her fans should probably take Tuesday off to mourn this senseless loss.