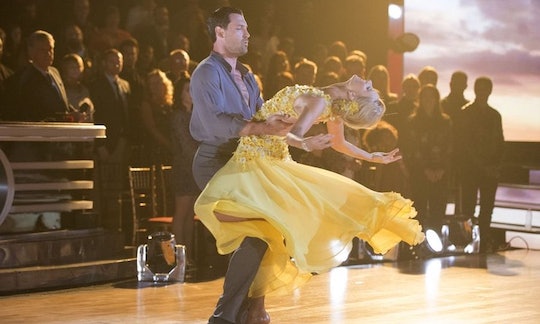 There's no question that Alan Bersten provided Heather Morris with a strong partner while Maks Chmerkovskiy was out with an injury on Dancing With the Stars, but Morris said herself that having Chmerkovskiy back felt like home to her. And when Heather Morris and Maks Chmerkovskiy received a perfect score on DWTS, it was the perfect way to bring the pro dancer back into the fold. Not only did Morris and Chmerkovskiy receive all 10s across the board from the judges, but it was the first perfect score overall of the season so far.

During rehearsals, Chmerkovskiy promised Morris that since she hadn't yet gotten a score of 10, he'd make sure she got one for their Week 6 performance. But he did her one better (or rather three better) and helped her to get all 10s. Bersten was a great partner to Morris and helped her get some pretty high scores during his time as her partner, but Chmerkovskiy's return to DWTS definitely kicked off without a hitch.

Their dance also included Bersten, who played the role of Morris' boyfriend who loses her to Chmerkovskiy and who got a drink thrown in his face at the end of the number. And after their song was over, Chmerkovskiy made it a point to thank Bersten for "holding it down for like a million weeks."

Unfortunately, unbeknownst to either of them, the pair's first perfect score would be their only perfect score as Morris was eliminated on DWTS in a surprise turn of events. Even though Chmerkovskiy hadn't been her partner for several weeks, Bersten had made for a strong partner who even choreographed their "Toxic" routine for Vegas Week, so it was still a big surprise.

You can't say Morris didn't go out on a high note, though, however unfortunate it was to see her go. No one could have predicted the way Monday's episode would end, least of all Morris or Chmerkovskiy, who had just begun to celebrate his return to the show and to her side as her partner.

The only good thing to come for Morris for Week 6 on DWTS was the fact that before she was eliminated, she was able to earn a perfect score and leave with her head held high and with a ballroom full of surprised and disappointed fans who'd likely been rooting for her. And even though he'd just returned to dance, at least Chmerkovskiy got the chance to help her get that perfect score.