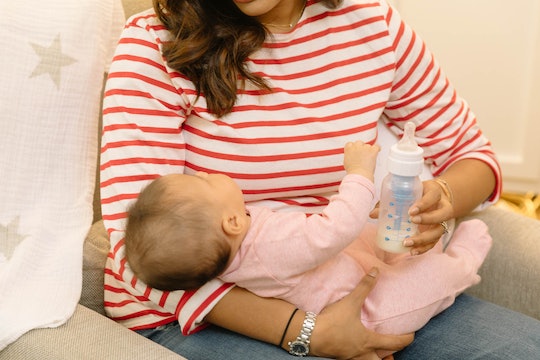 Here’s How Much Arsenic Is Safe For Babies, According To Science

It's true — I'm so over the "breast is best" versus formula conversation. Put simply, do what works best for you and your child. Of course, no matter which route you choose, the ingredients you feed your child are important, whether it's via your diet or a store bought formula. That's why many parents are worried about a scary study released Wednesday that found 80 percent of infant formulas tested positive for arsenic. But is there such a thing as a little arsenic not being a problem? And if so, how much arsenic is safe for babies?

"Arsenic is an element that can be found in water or soil based foods such as rice," Dr. Danelle Fisher, a fellow of the American Academy of Pediatrics and chair of pediatrics at Providence Saint John's Health Center in Santa Monica, California, tells Romper in an email interview. "People eat small amounts of inorganic arsenic in their diet; in the United States, the estimated dietary range is 1 to 20 micrograms (mcg)/day and drinking water in the US generally contains an average of 2 mcg/L. In 2016, the FDA proposed a limit of 100 parts per billion (ppb) of inorganic arsenic in infant rice cereal (similar to European standards)."

The Clean Label Project, a nonprofit advocating for transparent labeling, tested baby food products that had been purchased within the last five months. According to USA Today, out of 530 baby food products reviewed, 65 percent tested positive for arsenic, 36 percent for lead, 58 percent for cadmium, and 10 percent for acrylamide. Some of the worst offenders for formula were Peaceful Planet Toddler, Abbot EleCare, and Happy Tot.

Fisher explains that trying to limit exposure to arsenic containing foods or water is important for everyone, but especially to growing babies. "Since infant rice cereal is known to contain arsenic, parents should limit exposure to one serving per day of rice cereal," she says, adding that arsenic levels are monitored by the FDA and the recent studies should be taken into account by the manufacturers of the baby formula and food.

Fisher says it's also important to keep in mind that, while American formula companies are regulated by the Food and Drug Administration (FDA), foreign formula companies are not, so you will want to choose an American made formula. "The makers of Enfamil and Similac are the only companies that put research into how babies digest and grow and develop based on comparison to breastfed babies," she says. "All other formulas are knockoffs, despite engaging labels that say buzz words like 'organic.'" Of course, as with any concerns you have about your growing little one, Fishers says you should ask your pediatrician what brand they recommend if you are having a tough time choosing a formula.

Other safeguards for choosing — and preserving — your baby's formula include checking expiration dates on containers, Fisher says. "If you live in an area with a safe water supply that you would drink yourself, then there is no need to boil the water before mixing with formula," she says. "[However,] it may be desirable to filter the water before use. Nursery water is not necessary to give to your baby or mix with formula."

If your baby has symptoms of gas or fussiness, then they may be having a reaction to their formula, Fisher says. If you decide to switch and opt for another brand, that's fine, but consult your pediatrician before making more than one switch, Fisher says. "Remember to give the baby a good three to five days on a different formula in order to assess how the baby is doing (e.g. you may not see symptomatic improvement after one day)," she says.

And as always, do the research and then trust your mama instinct. Limiting the noise from other people and all of the "you shoulds" will help making those 3 a.m. wake up calls feel a little less overwhelming.

More Like This
Abbot's Formula-Producing Plant Can Reopen In As Early As 2 Weeks — Now What?
Can You Help Your Baby’s Hair Grow?
These Darling Baby Boy Names All Start With The Letter "D"
Here’s What You Need To Know About That Viral 1960s Baby Formula “Recipe”