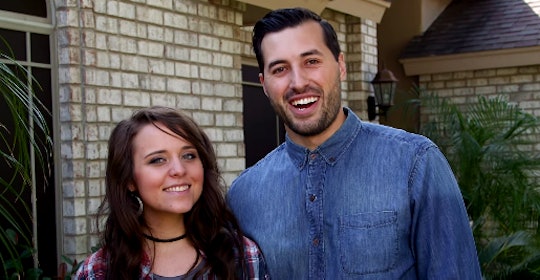 Jinger Duggar’s Daughter Is Here, & The Duggar Family Quoth Their Excitement In Some Very Sweet Ways

Jinger gave birth to a daughter named Felicity Nicole Vuolo at 4:37 a.m. on Thursday, according to PEOPLE. She reportedly weighed 8 pounds, 3 ounces and measured 19.5 inches in length at birth, and is healthy and doing well.

This is the first child for Jinger and her husband, Jeremy Vuolo. They married in November 2016, per E! Online, and announced they were expecting in January. This was the last expected Duggar grandchild for 2018, after a recent trend of Duggar babies including Joy-Anna Duggar's son, Gideon, who was born in February, and Kendra Duggar's son, Garrett, who arrived in June.

As the Duggars often do after a new member joins the family through birth or marriage, some of Jinger's family members took to social media to welcome baby Felicity and to congratulate Jinger and Jeremy on their newest addition.

Jinger's sister, Jessa Duggar Seewald, took to Instagram to share the news, with the simple caption, "Y’all. Baby Girl Vuolo is here!!! 😍 Check out the new family of three," along with a link in her Instagram bio to a more official announcement on Jinger and Jeremy's website.

Jessa has two children herself already — sons Spurgeon Elliot and Henry Wilberforce, who are both still pretty little. So she has some idea what Jinger went through during the birth and in the days after welcoming her baby.

The official Duggar family Instagram account used the same image Jessa did to express their happiness over the birth of Felicity, but a different caption. The caption read, "We are overjoyed for Jeremy and Jinger on the arrival of their sweet little girl!! They will be such wonderful parents! See their new family photo! •link in the bio•."

As of 9 a.m. Friday, Joy-Anna and her husband, Austin Forsyth, had not yet posted anything on Instagram celebrating Felicity's birth. Neither had Jinger's older brother, John-David, or his girlfriend, Abbie Burnett, on their shared Instagram account (the two are courting, not married, but are apparently allowed to share a social media handle anyway).

Josiah Duggar and his wife Lauren Swanson, who were married on June 30, also hadn't shared the good news on social media as of Friday morning. But to be fair, they might be off on a honeymoon or something at the moment.

Jill Duggar Dillard shared the same image Jessa and her parents did to share the news with her fans and followers on Instagram. She also posted about it on her Twitter account, with the caption, "Baby Girl Vuolo Has Arrived- Congrats Jinger and Jeremy!"

Jinger's brother Joseph Duggar and his wife, Kendra, seem to avoid social media, so there's no place for them to react to the news of Felicity's birth online. But they likely welcomed the baby or congratulated Jinger and Jeremy on their daughter's birth somehow offline.

Finally, Jeremy himself posted about his daughter's birth on Instagram. He posted simply, "Happy Birthday, baby girl. || check the link in my bio for more info ||," with a link to his website with Jinger for more details on the birth.

Just days ago, Jinger posted on social media about how she and Jeremy would be welcoming their little one "any day now," which proved to be very correct. They had previously revealed in April that they were expecting a daughter, the first Duggar granddaughter since Anna Duggar's daughter Meredith was born. Besides her, there was only one other Duggar granddaughter before Felicity's arrival — Meredith's own older sister, Mackynzie, according to In Touch Weekly.

It's been less than a day since news of Felicity's birth got out, so there will likely be more welcomes and congratulations from the Duggar family as time goes on. For now, Jinger and Jeremy are hopefully quietly enjoying their baby girl, and enjoying being parents for the very first time.