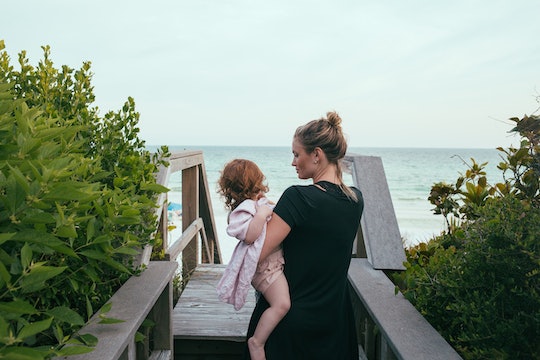 Here's The One, Absolute Worst Thing You Could Say To A Breastfeeding Mom

If you’ve never breastfed, please allow me to paint a picture for you. Imagine a loving, doting new mom with a crown of daisies on her head and a floor-length silk bathrobe (white, obviously). She looks well-rested and at ease. When it’s time to breastfeed, she sits down, holds her baby in position, he or she latches instantly with no difficulty whatsoever, and the two enjoy their breastfeeding session in a blissful bubble of familial love and bonding. There is no one interrupting, no one making comments, and certainly no one saying things breastfeeding moms don’t want to hear.

Okay, still with me? Now throw that image out the window, because it happens that way for no one. At least, no one I’ve ever known. I mean, my daisy crown only lasted a few days after I brought it home the hospital, so I hardly ever wore it again anyway. Kidding.

The real breastfeeding experience? Well, of course it will largely depend on who you talk to and what they’re up for sharing, but in the majority of conversations I’ve had, it’s often challenging, it’s always demanding, and it requires lots of time, patience, and energy; most of which are in short supply when a newborn is around you're attempting to figure out this new thing called motherhood. In short, it takes effort. I mean, I’m not sure about you guys, but I fully expected a chorus of angels to descend into my son’s nursery every time he latched, and gently harmonize for us while he nursed. Instead, I faced a seemingly endless barrage of challenges we that took so much out of my postpartum body and killed my fragile new mom self-esteem. Whenever we managed to actually be somewhat successful at breastfeeding for any amount of time, it was a big deal. It was cause for celebration. I’d be like, “Yeah, that’s right, I’m totally mothering right now. Here I am, being a mom. Look at me, world! I’m a parent!”

It might sound like an exaggeration to say it was a fight, but seriously, it totally was. Eventually, when my son was a few weeks old, he and I got the hang of it and our breastfeeding journey (as cheesy as it sounds to call it a journey) has been fairly smooth ever since, save for a few bouts of mastitis, blocked ducts, and supply issues. Did I mention that even smooth breastfeeding experiences can have peaks and valleys?

Through all of this, I’ve been fortunate to have a supportive partner, who never once rolled his eyes when I insisted that I would keep trying when it looked like it was going to be impossible. He never tried to talk me out of it, and he never doubted my decision to continue breastfeeding for as long as I wanted to, and as long as it was safe. He’s spent countless nights cooking, or grabbing me a glass of water, or carrying our son to me so I didn’t have to get up to nurse. He’s changed extra diapers, he’s dealt with my own leaks and messes, and he’s been nothing but supportive as we’ve gradually weaned to just one nursing session a day.

Not that I would have blamed him had he ever hinted at wondering why I was putting through myself so much trouble. But, to my surprise and honestly to my extreme thankfulness, he never brought it up. He probably knew that, if he had, and if he’d done it in a way that resonated with me, it could have made me question whether or not I should be putting my energy and time and emotions toward other parts of parenting. I know myself, and hearing him express anything other than support for such a personal, emotional, challenging part of parenthood (something I had to fight to be able to do), would have totally shaken my confidence.

Other friends and family members know that my son is still nursed in the morning, and have made lighthearted comments that have occasionally questioned when I plan to stop. I totally understand that there’s curiosity. But thankfully, no one has been dismissive of it (at least, not to my face).

In my own experience, breastfeeding is a significant part of the newborn experience. To criticize or doubt the effort a mom’s putting in, or even force her to answer to it with judgmental questions like, “What do you bother?” or even dismissive comments like, “You should just stop,” totally diminish what she’s established with her child.

During my time of complete and totaly breastfeeding difficulty, and even in the midst of very real feelings of defeat, I never questioned my decision to keep going, because no one else did. I know that not every breastfeeding mother is as lucky. When a woman is breastfeeding and her journey has a few speed bumps in it, the absolute worst thing you could say to her is anything resembling a plea to stop. Trust me, she realizes that she could use formula and she could wean. She’s well-aware of these facts.

But there are reasons why she hasn’t.

And, whether or not she wants to try for that whole white-robe, flower crown scenario. You do you, moms.