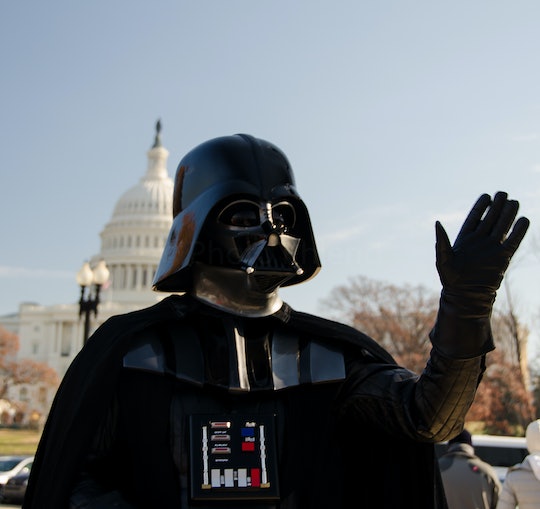 The Star Wars mania has been building steadily for, oh, the past year or more, and it's all coming to a head this week. Fans have been waiting a long time for a new Star Wars movie, and with this series in particular, there is a long history of fans going in droves at midnight to wear a costume at the Star Wars premiere. While you may be tempted to dust off your old light saber for the showing, beware: It may be confiscated at the door. In response to recent attacks and shootings, most movie theaters are ratcheting up their security, even when it comes to superfans.

When asked why the St. Louis-based Wehrenberg movie theater chain was limiting Star Wars costumes, a representative said, "I think you know the reasoning. I think we all do. It's to make sure we are in a safe environment, and everyone feels safe." Theaters across the country are implementing similar restrictions, and those policies are unlikely to change anytime soon, so plan accordingly. There are plenty of other ways besides wearing a head-to-toe Boba Fett costume to show your Star Wars spirit. Time to get creative.

With that in mind, here's what you can and can't wear to the Star Wars premiere. Have fun, be safe, and may the force be with you.

Sadly, this means no head-t0-toe storm trooper costumes. Sure, wear the body armor, knock yourself out, but helmets are a no-go. This also means no wookie costumes, so if you're planning on going as Chewbacca, you may end up just looking like a really hairy human with a tiny head. Bummer.

Sorry Lucas fans, no Darth Maul outfits. (But nobody actually likes Darth Maul, do they?) If you're going to use face paint you may as well try to be Emperor Palpatine or C-3PO or even Yoda, if you're artistic. Those are much more respectable choices, but put it out of your mind because the theater will have you in the bathroom scrubbing your face off when you should be watching previews. Nothing sounds worse than that.

This one seems obvious, but don't go bringing blasters or light sabers to your local theater. Besides, blasters are inelegant, non-Jedi weapons, so why embarrass yourself by being seen with one. Do you want people to think you're a smuggler? A scoundrel? Some no-good two-timer who's only claim to fame is doing the Kessel Run in twelve parsecs? I didn't think so. Leave 'em at home!

A thousand times yes. It is very doubtful the movie theater will hold this sweet hairdo against you unless being really good looking is illegal in your state. Check with your local representatives, but when in doubt, bun it out. The incredible Carrie Fisher is making an appearance in The Force Awakens, so why not give credit where credit is due.

This also extends to Jedi robes, of course, but no one — no one— in the empire is more dapper than Lando Calrissian. Sure, all robes are the most comfortable thing to wear to a movie ever, but why not wear some flowy capes in style. If you're more of a zen, Dagobah system sort, then sure, where the homespun brown Jedi garb. But don't expect any compliments from me.

Even with the restrictions, there are plenty of other options. The classic Han Solo vest-and-boots look is really in this season, or, if you're trying to be a bit more frugal, just cover yourself in dust and say you're from Tatooine. If you want to get a little more stylish, check out these Star Wars fashions that you can wear well beyond the realm of movie premieres. And, for your Jedi's-in-training, check out these DIY Star Wars costumes for kids. Get creative, plan ahead, and get ready to stand in some long, festive lines. Final word of caution: theaters aren't being explicit about Jar Jar Binks costumes, but unless you want to start some fights, don't even think about it. We've all suffered enough.