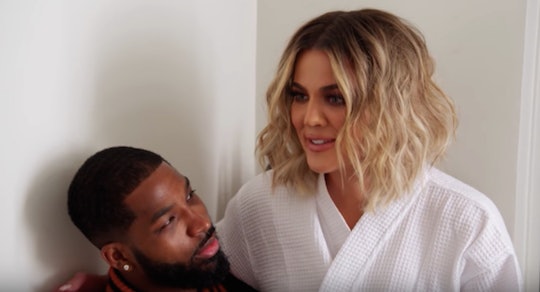 In case you haven't caught the thrilling news yet, Khloé Kardashian just dropped the news that she's pregnant. Yep, after months of rampant speculation, Khloé and her boyfriend, Tristan Thompson, officially confirmed the pregnancy on Wednesday night via a sweet Instagram post. Since then, fans have been analyzing every little detail about the exciting announcement, and people just can't seem to get enough of the parents-to-be. And if you're one of those people who is still obsessing over the baby news, you'll definitely be interested to know what Khloé and Tristan's body language in her pregnancy announcement reveals.

For what seems like forever, fans have been wondering how Kardashian would announce her pregnancy. Some people speculated that she'd share the news via the Kardashian family Christmas card, while others theorized she'd reveal it on an episode of Keeping Up With The Kardashians.

Personally, I think the most noticeable aspect of the announcement is what you don't see. The absence of Thompson and Kardashian's faces draws your your attention to the their hands, and how Thompson is clearly hugging Kardashian from behind.

Apparently, this is a very "protective" type of hug. A person who hugs someone from behind is "demonstrating traits of a protector and wants to show how much they cherish the person they are hugging," according to Urbo. Patti Wood, a body language expert, said of the pose, according to LittleThings: "By covering your back, he’s conveying that he wants to shelter you."

Although I'm sure Kardashian is more than capable of protecting herself and her child, I wouldn't be surprised if Thompson has been a bit protective throughout her pregnancy. This is Kardashian's first pregnancy, after all, and Thompson probably wants to "protect" her from overzealous paparazzi, for example.

And in Kardashian's announcement, she did touch on how Thompson has been an especially amazing partner lately. She wrote, according to Instagram:

As for Thompson and Kardashian's touching hands, that also shows a deep level of commitment and love.

When you hold your partner's hand, it shows "that you are thinking about them, there for them, and willing to offer them the comfort and security that they need from you," according to Mercury, a blog about personal development, love and relationships, and parenting.

Kardashian touched on the security she has with Thompson in August. She said, according to ET Online:

My boyfriend is very protective of me. Feeling loved and validated and secure is a huge thing. Tristan is protective of my entire family, which is beautiful. And I love that everything we do is as a union. When he speaks, it’s ‘us’ and ‘we,’ and that’s important because it shows that you’re sharing life.

So sweet, right? It sounds like Kardashian and Thompson have a great relationship.

Of course, it goes without saying a few poses in a photo can't sum up an entire relationship. It does appear, however, that the pregnancy announcement does symbolize their commitment to each other.