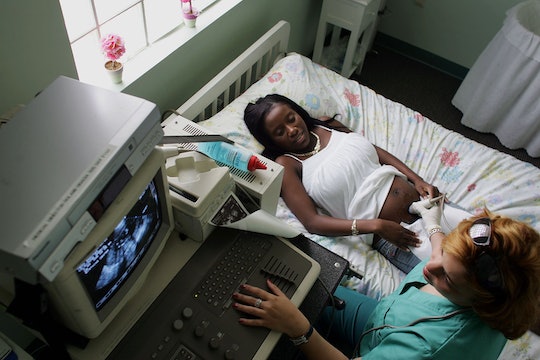 After a failure by the GOP to push forth a replacement plan for Obamacare on Friday — despite eight years of complaints and 2016 election promises — Republicans insist they intend to repeal the Affordable Care Act, former President Barack Obama's signature piece of health care legislation. While the American Health Care Act is dead in Congress, that doesn't mean that the health care America has gotten used to is completely safe from political interference. It's entirely possible that the country could go back to pre-ACA coverage, which is bad news for pregnant mothers. Here's what percent of insurance plans didn't cover maternity care before Obamacare: A whopping 88 percent.

That figure comes from the National Women's Law Center, who stated in a December 2016 report that only 12 percent of individual market plans provided maternity coverage. As anyone who's had a baby before the Affordable Care Act became law knows, women who became pregnant faced two major problems at the same time: Pregnancy was considered a pre-existing condition, and if her insurance didn't cover maternity care, then she was often forced to buy an expensive maternity rider to her policy. Worse still, pregnancy costs without insurance were exorbitant That's what makes the ACA so vital for millions of expectant moms — and a repeal of it just as dangerous and harmful.

And yet, there are some Republicans who either don't seem to understand how insurance works, or simply don't care. Take for example Illinois Rep. John Shimkus, a Republican who straight up asked why men should have to pay for prenatal care during a House committee debate on the AHCA. Last time I checked, babies were made from one egg and one sperm, but I guess Shimkus either missed that memo, or seems to be under the idea that women carrying fetuses fathered by other men don't deserve health care coverage.

When nearly half of all pregnancies are unplanned, according to the Guttmacher Institute, this makes the need for quality — and affordable — prenatal and maternity care so essential. Prior to the ACA, women who found themselves with an unplanned pregnancy faced a double whammy: The first being that they're pregnant, the second that their insurance likely wouldn't cover it. That's exactly why maternity and prenatal care was made an essential benefit under the Affordable Care Act.

For the GOP to try and roll back that coverage isn't just bad policy, it's bad medicine. As it stands right now, there is no fallback bill to repeal and replace Obamacare just yet, but it's important that all Americans understand exactly what's at stake for pregnant women if anything were to happen to the ACA.